When I hear a band described with a combination of adjectives such as ‘garage’, ‘fuzz’ and ‘stoner’ I’m immediately intrigued. As a long-time fan of both garage rock/garage punk and stoner rock, the idea of some heavy, fuzzy riffs blasted in the garage rock spirit, and attitude always sounds like a good time. Posing the idea of what would happen if you smashed the first six Black Sabbath records with The Stooges small, but lethal, discography has been an endlessly fascinating idea to me.

Loose Sutures from Sardinia, Italy evidently think the same way. The band describes themselves as ‘hard-stoner rock with a pinch of garage spirit, and a modern punk attitude.’ Fair enough, and judging by the sonics within these grooves, their description is accurate. A Gash With Sharp Teeth And Other Tales is Loose Sutures second full length, and it’s most certainly a fuzzed-out, rockin’ good time.

I have had A Gash… on heavy rotation since I received the promo to absorb. Loose Sutures peddle a particular brand of lo-fi, grimy, rock that’s at times trippy, at times heavy, that invokes thoughts of late 60s garage rock, mixed with the spirit of early Estrus Records bands, as well as late 90s fare like The Hellacopters first few releases, as if they were shot through Eddie Glass’s early-Nebula fuzz-boxes.

Opening with White Vulture, a trippy, instrumental that actually conjures up more of a desert rock vibe, than the distorted, garage rock of the aforementioned descriptions. This vibe doesn’t last long as the fuzzed-out notes and lo-fi vocals of Stupid Boy blow out of the speakers with a fuzzy, garage rock gallop, complete with shout-along vocals. Sunny Cola is an instant stand out for its distorted, surfy-60s style, beginnings before descending into some heavy riffage, and back again.

Last Cry wastes no time presenting itself as a fuzzy stomper, while Mephisto Rising brings the vibe way down into doomy territory, showing that Loose Sutures are capable of dwelling in either tempo. Vocalist/guitarist Antonio Pilo’s distorted sneer compliments the fuzz, and when recently acquired guitarist Giuseppe Hussain lets loose with a flurry of killer lead work during the midsection breakdown, Loose Sutures make their point crystal clear. Black Lips (an ode to the garage punk band of the same name?) is a fun, super catchy track that reminds me of a distorted early-Queens of the Stone Age.

A Gash… displays Loose Sutures seemingly effortless ability to bounce between heavy, stoner-style riffage and more catchy garage rock fare, including some psych-style instrumental freak-outs, like the mid-section of Animal House, and the trippy closer Death Valley ll featuring some excellent guitar work from both Pilo and Hussain, again conjuring a bit of a QOTSA vibe, while still keeping that punk-charged, garage vibe throughout. A Gash… a fun, catchy, blast of a record, checking many of the boxes I look for when diving into a garage and stoner band, including the lo-fi, late 60s style album cover and aesthetic.

I also must point out that Loose Sutures is yet another killer band emerging from the fertile Italian stoner and doom scene. As noted in my review of fellow Italians Bottomless, Italy has quickly emerged behind only the UK, and Sweden as ground zero for Europe’s underground heavy rock scene. Not only are so many awesome newer bands like Loose Sutures, and Bottomless emerging, but Italy also boasts some all-time classics of the genre with Ufomammut andEl Thule, to say nothing of The Black Rainbows, and their singer/guitarist Gabriele Fiori and his label Heavy Psych Soundsputting out wave after wave of quality releases. 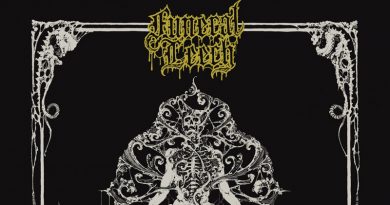