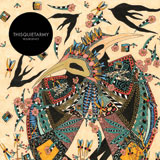 Washing into earshot on a wave of shifting, multilayered drone before piling in with a throbbing bassline, pounding JAMC-style steamhammer rhythm and washes of treated guitar, it’s hard to believe that Thisquietarmy is only one man. Eric Quach has been exploring the boundaries of sound with his guitar and an array of tweaking implements for a good three quarters of a decade now and I believe at least half of that time was spent on this very recording, a fact that is entirely believable when listening to the whole damn thing. Resurgence is utterly colossal in scale, scope and tone and when one factors in the fact that one man alone created everything heard herein – with the exception of a touch of violin and some sparsely used female vocals in one or two tracks – the entire endeavour just beggars belief.

Bestriding the worlds of Drone, Ambient music, Shoegaze, Post-Rock and Space Rock, Quach nimbly and deftly blends the best aspects of each together to create something wholly of his own. That Jesus And The Mary Chain beat, when welded to a cavernous bassline, layers of synth, topped with crystalline guitars and dripping with reverb just sounds immense.Following the short intro, ‘Rebirth’, this general approach threads through ‘Revival’ and ‘Renaissance’, tying them together as one extended piece, or two parts of a small suite perhaps, and allowing Quach to fully explore all of the sonic nuances available to him. Ebbing and swelling, the synths, drones and treated guitars twist and shimmer around the central core of pumping rhythm and steely bass like arcs of lightning coiling around a generator coil.

Elsewhere, ‘Birds, Ashes & Fire’ takes the tempo down a notch and opens up spatially, as humming, thrumming guitar and synth phase in and out of one another above an undertow of shifting bass and snare cracks, ‘Whispers In The Trees’ builds from a distant buzzing into a watery pool of plangent tones, swells and chimes, ‘Mechanical Heart’ sounds exactly like that – a monolithic mechanical heart, alive with a hammering beat and eddying skirls of pulse – ‘Whirring Brain’ gradually phases in a monstrous fuzz behemoth guitar and pounding drums of doom over a whirling flutter of looping chiming tone, and ‘Summer Isolation’ is a slow-motion heat haze of shimmering organ, casiotone and mogadon drum machine.

Finally, the end is reached with ‘Gone To The Unseen’, twelve majestic minutes that shift from fizzing buzzsaw drone, through monumental ambience, ethereal guitar and synth harmonies, taking in understated female vocals, buried drum machine patterns and blankets of tonal fug before eventually arriving at a whirring cut-up of shifting tone that disintegrates into delayed, reverbing static.

Now, the thing is that since Resurgence took four years to evolve, Quach found that he also had an overspill of parallel material that fitted in more with the style showcased here than the other, darker, end of Thisquietarmy – what to do with it? Simple – Expand Resurgence into a double disc set!

So, what we have here is an extra disc containing five tracks that were completed towards the end of the Resurgence sessions and were felt by Quach to be a good tonal fit and a ‘Radio Edit’ of ‘Gone To The Unseen’ that skilfully halves the length of the original whilst still retaining the structural integrity of the track.

Not quite as lush or fully tonally realised as the main body of the album, the five bonus tracks do indeed share similar space in their general mood and execution, with the gorgeous, Durutti Column-esque ‘Scattered To The Wind’, the dark pulse of ‘Ballad Of A Shepherdess’ and the ‘Eno-circa-Another-Green-World’ feel of ‘The Cold Vacancy’ in particular clearly sharing common DNA with Rersurgence, whilst the more obviously rhythmically-driven duo of ‘A Call To Arms’ and ‘Waltz Of The Mourners’ feel like semi-skeletal versions of tracks that could go on to be much more sonically dense and expansive when compared to the rest.

The passion, drive and attention to detail of Quach is firmly ingrained right across Resurgence, it just oozes love – love of music, love of playing, love of tonal variation – and is made all the more extraordinary for it.

There is never a dull moment here for the adventurous listener and the rewards of listening are great. This is one that deserves to be remembered.