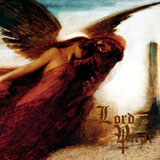 I’m going to level with you from the start. I haven’t, to my knowledge, heard a single note of any of Lord Vicar’s previous output up until having to review this year’s new slab of old-skool heavy from Church Within Records. Not only that, but aside from bashing through “In the Rectory of the Bizarre Reverend” on Spotify a couple of times, and cranking ‘Doom Over the World’ every now and again on the iPod, I’ve earned no real Reverend Bizarre stripes either. Call me uneducated, declare me not trad enough, seize my ears and cast them aside onto a pile of misshapen Trivium CDs in disgust, but I guess I just wasn’t around when those nitrogen-veined Finns were at the height of their miserable powers. OK, PLEASE, for the Love of Odin’s eyebrows, DON’T do that Trivium-thing, but for those of you who are still reading, what you are about to get is a review of these already established heroes’ latest album untainted by comparisons to any prior vinyl delights.

Peter Vicar (or Kimi Kärki to his Mum) is clearly not a man content to sit back and let the past shape his future in any case. The strident, confident and class-oozing riffs aboard the likes of ‘The Answer’ and ‘Signs of Osiris Slain’ confirm that it’s not just the heaviest tones, most complex arrangements or ugliest wrath that can achieve you success in this crowded doom and sludge market in 2012. No, the full package is needed before you can kick back in your armchair, record player a-turning, snap open a beer and declare that “this is good music”. It’s got to have bounce, gallop, pace, steadiness and acoustic-led 70s textures in addition to the slower, macabre, neck-wringing density that repetitive Iommian riffing gathers by itself. It does help that he has the unmistakeable vocal tones of Lord Chritus on his side too. Combining Ozzy’s power and mystique, the grandiose atmospherics of Eric Wagner and the solid bone-rattling clarity of Wino into one single strident wail, this has to go down as one of the ex-Terra Firma, Count Raven and Saint Vitus singer’s finest performances behind the mic.

What strikes me more than I expected with ‘Signs of Osiris’ is that it’s perhaps much more a classic rock exhibition than a doom metal monster. Groove-laden opener ‘Signs of Osiris Slain’ and its partner-in-crime track ‘Signs of Osiris Risen’ scream more Deep Purple, Rainbow and UFO than Trouble or Pentagram with a bouncing bomb of a core riff that’s as infectious as it is super heavy; so infectious in fact that it anchors the record across both meandering tracks. ‘The Answer’ is as close to a doom radio hit single as you’re likely to encounter – selling its soul to thee Sabbath and “forever trying to find a way out”, it will not be beaten for vintage catchiness wherever else you look for such rhythms this year. ‘Child Witness’ is a haunting ballad, Vicar’s guitar edging into blues territory as a chariot for Chritus’ misery-bound take on the “evil deeds of man” as seen through the eyes of his innocent child. Strangely swaying midway into a Deep Purple-esque ramble through bass-drunk pastures of cosmic energy, the track blossoms before dumping us back into the depressive mire where we began. Such is life.

‘Between the Blue Temple and the North Tower’ offers us a glimpse at the doomier side to the equation. The riffs slow to a wall-crumbling mass as Chritus dips lower into his range, building a “cathedral of fear” that sounds nearly medieval in its spirit. It’s not all gloomy – Vicar saves some of his most glorious dove-tipped solos for the back end of this song, stepping into the mould of a guitar player that Reverend Bizarre promised, but that the Lord Vicar delivered for himself. ‘Sinking City’ and ‘Endless November’ are the points at which this richness both peaks and wanes at the same time. The former is a near Trouble replica with a killer hook and a righteous chorus-line whilst the later becomes a folk-rock trip into Jethro Tull territory. The idea of opening and closing the record with a mammoth split title-track is demanding but rewarding to the listener. Hearing that classic riff come back to your ears after a near hour since its first appearance is a comforting triumph and it’s here that the band’s faultless performance passes over the bridge into their comfort zone of the term “Legendary” via some heartfelt acoustic guitar for good measure.

As I said from the top, I don’t feel that ‘Signs of Osiris’ neither needs nor deserves to feel the pressure of being compared to Peter Vicar’s bygone past albums. It rocks, it dooms, then it rocks some more and the varied territories that Chritus, Vicar, bassist Jussi Myllykski and drummer Gareth Millsted manage to straddle are more than most bands could hope to cover throughout an entire career. The Reverend is dead, long live the Vicar etc etc, I’m off to hunt down the back catalogues of both bands properly – it’s been a long time overdue.