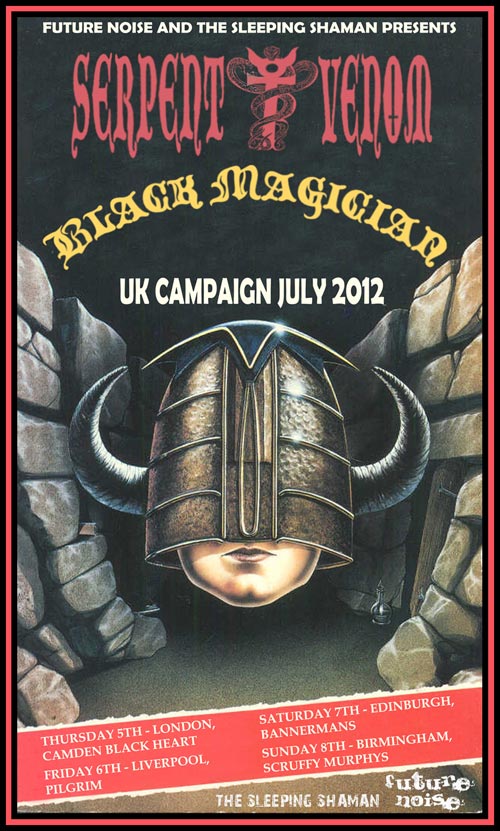 Future Noise and The Sleeping Shaman are thrilled to announce that this July will see the coming together of 2 doom warhorses in the guise of London’s SERPENT VENOM and Liverpool’s BLACK MAGICIAN.

We still need to fill a couple of dates on the Friday and Sunday, so if you think you can help, please do drop me a line using my contact form HERE and the so far confirmed tour schedule is as follows:

And here’s a bit of info about the bands…

Serpent Venom
Serpent Venom arose from the grave in 2008. Originally conceived by Pete Fox (Olde Crone) and enlisting Paul Sutherland (Blood Island Raiders) they sought out Garry Ricketts (Sloth) to tell his tales to the backdrop of their sounds. The weight of the guitar and sheer fury of the drums had to be kept together by bassist Nick. Together they channelled Pete’s riffs, Paul’s thunder and Garry’s tales of sacrifice and woe into the sonic potion that is ‘Carnal Altar’. Receiving high praise from the doom community the band ventured forth to the live arena in support of their Church Within debut.

In 2011, Pete amicably left the band to live in the US and the band have enlisted 6 string wizard Roland Scriver (Sloth, End of Level Boss) to continue their path towards the blessed darkness. Sharing the stage with such bands as Blood Ceremony, Lord Vicar, the Devil’s Blood, Taint, Manatees and Devil to touring with Orchid, Seamount, Conan, Grimpen MIre and Undersmile, the band continue to lay waste to live venues in the UK and Europe.

Black Magician
In an age when music tends towards the derivative, the mechanical, the over-produced, Black Magician cast their attention backwards, and then back some more. The result of many a long discussion in country pubs, and long rambles through the more isolated areas of the English countryside, they formed through mutual appreciation of 70s prog, eerie folklore and a good real ale.