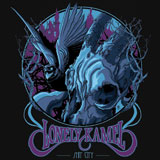 It’s still unusual to find that one of Europe’s strongest exports of desert rock, especially with a name like Lonely Kamel, hails from the frost-bitten lands of Norway, culturally famed for its black metal output. Yet on the brink of releasing their fourth studio venture, the quartet from Oslo state their case as to why they are relevant and rightfully lay their claim to the forefront of the modern desert scene.

From the opening seconds of title track Shit City, it’s an immediate statement of intent, as the guys come rip-roaring out of the gates with a raucous, blistering guitar attack. In where the group are so versed in the classic, blues-based artists of the seventies, it’s thrilling to see another guitar heavy movement of the seventies tapped into: that of punk rock. Raw, unapologetic attitude runs deep in the veins of this body-rattling track and serves as the perfect introduction into what makes this album great. This leads straight into the heavy psych of White Lines, a fine example of the consistently stellar guitar work throughout. The interplay between the fuzzy, almost Clapton-esque riff foundation and the wailing lead guitar, that builds in confidence to an incredibly satisfying solo is an early highlight and more evidence of the group’s undeniable talent.

Is It Over follows, slowly leading in with an infectious guitar and vocal hook, before taking flight into powerful vocal-driven verses that would sit right at home in Zeppelin’s playbook. A darker turn however begins halfway through, descending into both guitars trading the same hook off one another, only backed by grinding bass and shaken percussion.  It takes back to the skies once more, but provides an interesting shift in dynamics to the album’s otherwise loud and proud character. The constant flow of riffs from Seal The Perimeter is another such shift, comparable to that of a stroll in the sand dunes. The classic stoner swagger is unmistakable and typifies what is great about the genre today, but the added squeeze of doom makes the tone noticeably heavier and opens the capacity for Lonely Kamel to pulverise just as hard as any other doom band. Further shades of this are teased in the album’s final track, an update of Iommi-mentored Necromandus classic Nightjar.

Freezing on the other hand, is a six minute journey that certainly feels like a force of nature. It builds up as a whirlwind, tension emphasised by a tribal drum rhythm behind it, before exploding in a hurricane force gust, exciting as it is devastating. The unity of both guitars, bass, vocals and drums literally sounds like they are battling full-force winds, given such passion and intensity in their playing in the second half of the song. Somewhat longer is the penultimate Falling Down, a seven minute good time, bar house hard rock stomper, oozing from head to toe in sleaze. The chorus hook is as catchy in comparison to any riff on the album and it seems impossible to not imagine a sing-along en masse, given enough due time to embed it into your brain.

Vocalist Thomas Brenna jokingly remarked that they wanted to make ‘as simple and as cheap an album they could possible’ in regard to Shit City. Production sounds top-class for something meant to be cheap and in sound, there’s a surprising amount of depth for something to be labelled as simple, however by no stretch of the imagination does it contain anything of labyrinthine complexity. What you’re given is a group who’ve spent years fine-tuning their craft and with their influences emblazoned on their sleeves, not ripping from arguably the greatest era in guitar-centred music, but giving you their own modern perspective on it. Not only is Shit City a rewarding listen, but in some respects, it’s a refreshing one and that alone is reason enough for them to claim their place at the forefront of the desert rock movement.