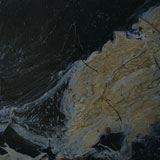 In order to fully accommodate the full scope of their vision, the core duo of Locrian – Andre Foisy and Terence Hannum – have enlisted an ensemble of players from the various outer reaches of musical extremity and four, count ’em, FOUR separate labels so that the vastness of ‘Territories’ can be fully unleashed upon the unsuspecting world at large. As excellent as their last full-length, ‘Drenched Lands’, was, ‘Territories’ is, well, a whole ‘nother territory. The sound world created herein is truly expansive, spanning Locrian’s usual pitch-black droning minimalism, through to black metal on an epic scale, taking in meditative post-space-rock guitar and icy synthscapes along the way, and often ALL of the afore-mentioned at once.

The four collaborators that Foisy and Hannum have recruited for ‘Territories’ are Mark Solotroff of Bloodyminded, on vocals and synths, Blake Judd of Nachtmystium, on guitar and vocals, Bruce Lamont of Yakuza, on vocals and sax, and Andrew Scherer of the unknown-to-me Velnias, on drums. These four help to flesh out the sound of Locrian, allowing them to function almost as a ‘band’, in real-time. The additional members and instruments allow for a greater, more well integrated, palette of tonal variety, and a more obvious use of dynamics.

Opening track ‘Inverted Ruins’ has the spine of a pulsing, ebbing skeletal synth throb and funereally paced drums, overlaid with layers of minimal yet piercing feedback and choppy, skittering insectile electronics. Beneath this Solotroff spills slow-burning throaty bile about the collapse of civilisation, whilst adding further sonic weight to the juddering processed synth tones that cloak him. The track ends, collapsing under its own weight into nothing but a heavily delayed synthesizer squelch, stuttering into empty space. ‘Between Barrows’ is a dead-black organ drone exploration, with the saxophone of Bruce Lamont hoving into earshot between dense fog-banks of shimmering cymbals and echoing ambience, like a ship lost at sea and sounding its mournful horn into blank space in hopes of a reply. Two minutes into the third track ‘Procession of Ancestral Brutalism’ is where everything changes, as the full-on black metal guitar assault of Nachtmystium’s Blake Judd explodes out of the black hole of sound that preceded it. An icy blast of trebly BM riffing, ala Wolves In The Throne Room, and full-tilt blasting drums blare out of the speakers, whilst the anguished screaming vocals of Solotroff, Hannum, Judd AND Lamont let rip from what sounds like an echo chamber several miles below the earth. This in turn then opens out into a space of throbbing, surging bass notes, and whirling guitar, the drums punching and splashing in emphasis. Sounding at once arctic, organic and totally venomous, the track is unlike anything Locrian have done before. Fourth track ‘Ring Road’ is another dark, throbbing exploration of the lower depths, along lines of the opening track, but DENSER and, dare I say it, DARKER. The squalls of electronic skree and the blocks of analogue synth in even more abundance. Next track ‘Antediluvian Territory’ is what COULD be construed as a ‘meditative’ guitar piece, with plangent, delayed guitar lines and chiming harmonics ringing out in a way reminiscent of Robert Fripp….that is if it wasn’t for the indefinable air of impending dread being conjured up by the accompanying collossal bass drone and the snake-like hissing ambience. Meditate to THIS and say hello to nightmares and cold sweat.

‘The Columnless Arcade’, the final track on ‘Territories’ is where everything that has gone before comes together in one kaleidoscopic auditory hallucination. Echoing, delayed and heavily processed syhths and electronics whirr and endlessly collapse into a vortex, from which emerges that icy black metal blast once again, whilst enormous bass notes judder and depth charge below the serpentine mass of sound. Solotroff howls as the guitars entwine in a post-psychedelic black metal tangle, chiming and swooping at each other through acidic delay like Helios Creed by way of Enslaved, and it has that same feel to it as the serpentine guitars of Beefheart’s ‘Kandy Korn’. At once fragile and epic. The track is cosmic in the truest sense, and a fitting ending to such an all-enveloping piece of work.

The scale of ‘Territories’ is vast indeed, and such a project on such a scale could have easily failed and fallen into the trap of throwing TOO much into the mix, but it has succeeded effortlessly. ‘Territories’ is a triumph of sound, and deserves to be heard by EVERYONE of an adventurous musical leaning. Especially those of us who do not usually care for black metal. 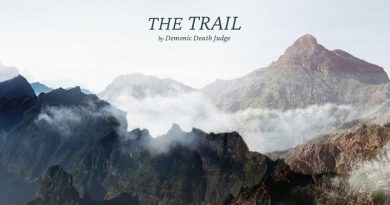