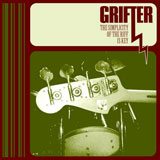 Ever since Grifter burst onto the scene back in 2004/2005 with a beer in hand, a roach in the ashtray and a handful of tunes designed to make girls boogie and dudes bang their heads, they have, at times unfairly, been pigeon-holed with the inevitable Stoner Rock tag.

Rock journalism, no doubt fuelled by the same inebriates, can be amongst some of the laziest hack jobs ever published and as such when I read about a band influenced by the masters of desert rock (Kyuss for those of you out there whose short term memory has been robbed of its abilities by Mary Jane) as every stoner band must pay homage to, I was surprised when they plugged in, tuned up and kicked out old school jams more reminiscent of AC/DC, Motorhead and Clutch.

Make no mistake, these guys aren’t holed up in a basement rehearsal room sucking on a bong, they are out there in your local dingy venue playing with the energy of Zebadee on amphetamines, pilfering your beer and telling the ladies to get down the front and shake their ass’es.

‘The Simplicity…’ builds on the solid work that the band have carved out in their two previous EP’s crashing in with ‘The Voices’ the band put their heads down and go for the blues rock jugular. The lurching, collapsing, stop/start riff work of guitarist/vocalist Ollie gives the track a hypnotic feel that is designed to reel in punters at the bar, pulling them in to join the Grifter choir on the sing-a-long gang chorus.

‘Blind Rat Swarm’ shows another side to the band as they opt for a more direct, urgent approach. Seemingly a more serious style, the song is no less classy as Ollie’s raw voice bellows in a whiskey soaked manner that recalls Lemmy and Billy Gibbons.

The gem of this release though has to be the absolute behemoth that is ‘Pendulum’. The song hinges on the interplay between bassist Phil and madcap drummer Foz as it, literally, swings back and forth on a massive groove. Certainly as far as released material, this track is the finest they have penned and showcases Grifter’s ability to write a seemingly simple, but effective track that nods it’s head to the feel of the 70’s but manages to sound timeless in its own right.

‘I Jesus’ rounds the four track EP in fine style, but its impact is slightly lost after the previous tracks raising of the bar. This is no condemnation, as the song is another gritty blues work out that tips it’s Stetson at ZZ Top but retains that trade mark Grifter stomp.

This is a great EP, a snapshot of a band who know exactly what they want to do and how to do it. They exist in their own space because simply they don’t care about fitting in and ‘The Simplicity…’ captures this in fine, if not short, style. Like the best things in life it leaves you wanting more and if they can maintain the high standard for a full length release then they should rightly be taken as medication.