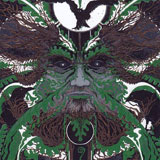 Landskap is a new UK band with members of Serpent Cult, Pantheist, Fen and Dead Existence, on their debut they show that apart from playing ridiculously heavy music in their other bands, these guys can also get their groove on!

‘I’ is an album filled with heavy seventies, ranging from doom to psychedelia and a touch of proggy stuff. The four tracks contained here in where recorded by Esoteric`s Greg Chandler and mastered by Frederic Caure, who plays the bass and rhythm guitars on this album. It is available as a free download on their bandcamp page and an LP version is coming up soon, featuring artwork by the gifted Manuel Tinnemans.

The album opens with the 11+ minutes track ‘A Nameless Fool‘. A sound reminiscent of Popol Vuh`s ‘Hueter Der Schwelle’ is combined with true Sabbathian heaviness. The result is one of the best doom riffs since the opening riff to Krux`s first album. Organs enrich the whole and a tolling church bell gives it an ominous feel. The voice of George Pan is clear, warm and full of emotion.

The riff is repeated many times, but it never gets old. Reverend Bizarre also comes to mind. After about seven minutes a slightly faster part comes around, giving way to some soaring guitar leads and a somewhat more laid back vibe. The song closes of with a onetime only return of the first riff. A great, sorrowful track in the best doom tradition.

Second track ‘My Cabin In The Woods’ is a spaced out instrumental interlude, driven mostly by psychedelic keyboards and a relaxed picked guitar playing. This two and a half minute break on green pastures is a nice rest after the heaviness we encountered before and also a good moment to gather strength for what lies ahead.

And what lies ahead is ‘Fallen So Far’. A good bit of heavy doom, crushing riffs, combined with organs and a ton of groove. The first two riffs are just doomed perfection. Then, just about halfway a deadly groove sets in and heads start banging. Heavy blues rock is brought back to life here, with some excellent twin leads and killer solos. This groove keeps us pumping our fists until the end of the track.

The final song ‘To Harvest The Storm’ might just be the best song on the album. It starts off very psychedelic, almost like The Doors and their ilk. Slowly, very slowly the sounds swell up and the soft and gentle breeze takes on more and more power. Slowly the quiet and calm is replaced with a whirlwind of leads and grooves and one feels oneself being lifted off the ground and taken along in the twirling winds. At the end we are gently put back down to Earth, only to press “play” again.

This is a stunning debut effort by Landskap and I hope we will hear a lot more from them in the near future! Now go and download this! 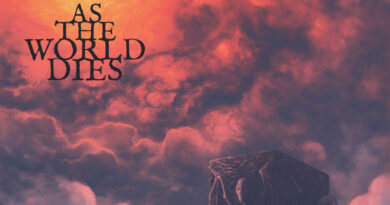