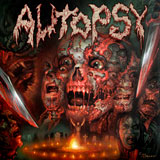 I think it’s only fair to admit that this review is heavily biased. There is no attempt to engage in “objective judgement” or “constructive criticism”, because neither are necessary where AUTOPSY are concerned. I’ve pretty much loved everything drummer Chris Reifert and his merry band of sickos have been involved in over the last 25 odd years, and their output spans from their native death metal to GG Allin worship (Eatmyfuk), psychedelic rock (Mirror Snake, highly recommended!), goth rock (Sixx) and black metal (Von). A group of people for whom creativity and music are well and truly a way of life, which makes it all the more amusing hearing people accuse them of selling out or diluting their sound, or having just plain lost it.

For those of us who have been keeping track, there is a steady thread that runs through the various reaches of the Autopsy family tree: from the outright death metal of Reifert’s legendary début on the classic “Scream Bloody Gore” (still my favourite Death album), to the speedy mania of “Severed Survival”, then the death/doom crawl of “Mental Funeral”, followed by the crazy ur-prog tempos of “Acts Of The Unspeakable”, then the utter depravity of “Shitfun” (“Praise the Children, with their toothless jaws satisfying my darkest thirst!”), before we dive headfirst into the grimy early punk years of Abscess, which then morphed into a far more polished but still endlessly brutal sickodelia, which culminated in a fabulous swansong called “Dawn of Inhumanity”. And then Clint Bower bowed (no pun intended) out and that was it (no farewell Abscess show for us Europeans, will somebody please make this happen!), and from these ashes Autopsy became a full-time entity, and their comeback album “Macabre Eternal” followed and delighted me from beginning to end. It was everything I wanted from an Autopsy album – filthy riffs, disgusting lyrics and mental speed-freak solos. For those of you clowns that moaned that it was too long, your short attention span will be satisfied with “The Headless Ritual”, as it only spans the length of one LP, and (of course!) it’s easily as good as their comeback album!

Opener “Slaughter at Beast House” is about as good a statement of intent as they’ve ever done, initially a blast of out-of-control punk energy that smacks of “Charred Remains” – the song slows down to Coralles & Cutler’s trademark Trouble/Candlemass twin guitar attack, with Cutler’s solos showcasing his (and indeed the rest of the band’s) well established love of Frank Zappa, weird scales and movements up the fretboard that defy belief. Trevisano also gets his solo spot midway, while Reifert gives a savage vocal bellowing that is almost spoken word, something the band first did on “All Tomorrow’s Funerals” to great effect, although it works even better here, total fucking madness!

“Mangled Far Below” features music written by bass player Joe Trevisano (formerly Joe Allen, the link to Von and Sixx) – the riff just before the fifth verse is one of my favourite Autopsy riffs of all time now, it has that utterly MORBID and CREEPY feeling that gets under your skin! “She is a Funeral” was a song title that didn’t convince me at first, but thankfully listening to the song, it makes total sense, and stylistically is closer to the last two or three Abscess albums than any of Autopsy’s output prior to breaking up. Just when you think the song is over, the return of the MORBID is back, with a creepy melody that could have been something off a John Carpenter soundtrack, Reifert going utterly bonkers over the top. At their best, Autopsy’s music has always sounded like the soundtrack to a horror movie, and the next track (“Coffin Crawlers”) also has this quality, in my mind’s eye it’s Danny Coralles’ tribute to “Tales From The Crypt”, but of course it’s about tearing out your eyes to save them from being eaten by worms. Sick fucks – trying to outdo the mighty Impetigo in the brilliant, slimy lyrics stakes!

The band indulge us in some brilliant opening vomits in “When Hammer Meets Bone”, about a family of degenerate cannibals that chop people to little bits and keep them in the freezer (“Let Granpaw kill this ‘un!”). My favourite lyrics of the album are from this song: “Blunt face smashing is the law / Your skull and mind are blown” – it’s this sense of humour and genuinely sick spirit that has elevated Autopsy’s lyrics above that of a simple “gore” band, never content to just revel in describing a way to dismember a body, Reifert and Cutler’s lyrics rub your face in the gore and laugh as it stains your clothes. And to top it off, this song has my favourite “WOOOOAAAAARRRRRGGGGHHH” of the album, a series of utterly demented screams that are unmistakably REIFERT!

“Thorns And Ashes” is a little interlude which they could easily have titled “Epicus Zombiecus Metallicus”, anyone who says Autopsy can’t/shouldn’t do epic can piss off, this kills! “Arch Cadaver” has the best opening riff of the album, courtesy of Coralles’s frethand, MORBID GOOSEBUMPS ALL OVER! “Flesh Turns to Dust” is another trip down the morbid route, with added Trouble from Cutler’s solos – thing is, Eric Cutler is easily one of the best guitarists out there, but with him it’s never about being as brutal/fast/technical as he can (although he can do all three with consummate ease), Cutler is able to inject a feeling of such total HORROR into his playing. He is to death metal what Reagers is to doom metal, utterly peerless and evil!

And just so you don’t forget, Cutler does the vocals for the penultimate track on the album, “Running From The Goathead” – he was responsible for one of the best tracks off the last album, “Dirty Gore Whore” (“I’ll carve you a new fuck hole / and chain you to my toilet bowl”), an ode to romantic love if ever there was one. Whereas Reifert’s vocals are morbid, sick howls from beyond, Cutler sounds just plain fucking insane – you can practically hear him frothing at the mouth! To finish up the album, Concord’s finest have come up with an instrumental that is right off the first Saint Vitus album – total horror from beginning to end.

This is not a review that is meant to turn your opinion of this band. If you love death metal, you love Autopsy, simple as that. And any album by the Masters deserves your full attention, and if you need it explaining to you, then you deserve only pity – there is nothing not to like about this album, although I must confess myself a trifle disappointed by the Petagno artwork. Maybe I expected more from the artist that was a pivotal part of Motörhead’s aesthetic, but it feels a little lacking… It looks better in real life than as a shitty jpeg, and it is great, but perhaps the problem was that art for “Macabre Eternal” was so good (to say nothing of their first four albums), how you gonna top that? The Zombie caricatures of the band on the inside cover are pretty fun, I especially dug GG’s gravestone and trying to make out what band shirts they were all wearing! It’s all in the spirit of Autopsy, and the band are clearly doing their own thing without any regard for anyone’s enjoyment but their own – there are no attempts (to my ears) to appease fans of certain albums with certain tracks. Autopsy are doing what they’ve always done, writing horrific death metal with morbid riffs, crazy lyrics and a massive dose of DOOM. The production is modern but the spirit lingers on, no attempts to recapture past glories here. This band are better than ever, and if you don’t like “The Headless Ritual”, you can eatmyfuk.