Grief Eater come trudging forth, as ex-members of Dublin’s Obstacle and Belfast’s Unyielding Love collide with former Bacchus and Only Fumes and Corpses Galway veterans to bring us a sludge-laden excavation of sound.  Over the past decade Ireland has offered much to the slower, more crushing side of extreme music in the form of Gourd, Wreck of the Hesperus and most recently Genuflection and Procession of Spectres.

The creeping, morose atmosphere of sludge and doom is something that Irish bands exquisitely capture. Ireland exists as a place with a rich but often sombre history, paved over by the concreted modern of a globalised world. Grief Eater’s debut LP, put out early this year by Distro-y Records, feels like something that is rooted in a time of antiquity, only to be brought forward to the present to make us aware of what it is we are sacrificing: our own identities in exchange for a barren future.

The album opens with Imithe In Éag, classical Irish for ‘extinct’. A fitting introduction, when translated directly this now archaised term means something like ‘having left into death’. With words alone Grief Eater already create a brooding atmosphere over what sounds akin to an inhabitable tundra, until it’s broken by a ferocious clamour of to-the-point hardcore-tinged sludge. Straight forward, mid-paced pounding drums and bass are coupled with spidery guitar flourishes which echo the crust punk provenance of the band’s past.

Laden over this barrage, the screamed vocals are immediately striking, containing a sense of depth, reminiscent of the early works of Cult of Luna and Isis. The opener closes through an outburst of open blasts, exhibiting a strong interest in contemporary black metal. Beautifully polished in sound and execution, but also still thick with grime and grit, Grief Eater immediately create a nasty compression which one cannot help but feel caught amongst.

After the violent charge of Imithe… Chamber’s attack is comparatively slower but none the friendlier. Here the band is portrayed in their true sludge form as the verse’s riff bounces forward over a steady beat, never allowing itself beyond a mid-tempo pace. A locked groove sets in until the traditional sludge feel is once more broken by infectious blackened blasts.

Walled into a garden of harsh sound we are carried into Insular Domain where Grief Eater takes an almost mournful turn, not uncommon to The Ruins of Beverast. Perhaps the stand-out track on the album, Insular Domain gives an already comprehensive band a chance to furthermore experiment. Within the bridge we note the introduction of old-school death metal influences, as the album’s pace quickens to a gallop only to be brought spiralling back down into the depths of blackened sludge. The track’s title and lyrical content may act as a retort to the present state of Ireland: ‘They cannot provide a clean state, leftover ends fray belief, attrition erodes all ground once held, content seeps, opinion as law, plague spreading’.

Empire Of Profligacy critiques themes of Caligulean extravagance coupled with a thunderous and profoundly melodic blackened crust influence.  Perhaps channelling the likes of Fall of Efrafa, lyrically the song acts a letter in retrospect to the present from a desolate future that knows the price humanity will pay for wasteful convenience: extinction. In the final minute of the song we are reeled back into a dreamy guitarscape accompanied by distant, far-off shouts of warning: ‘Extinction parade, convert to stone and betray dust’.

We are awoken from this trance by the visceral ferocity of the album’s conclusion: Ephemeral Belief. Grief Eater don’t seem to follow traditional song structures, however, in the end the melodic instrumentation of the guitar seems to lead vocalist Jonathan Lynch in procession. An assemblage of heavy stops and starts, the final track concludes through a series of minor chord progressions until it collapses, leaving the listener to be drowned in feedback, ears ringing and mind racing.

Dublin’s Grief Eater has contributed a heavy hitter to the genre of sludge, in both sound and mind. At times it can be difficult not to think of the mark that the band’s predecessor Bacchus has left on it. Since listening to this I’ve gone back for the first time in years and rediscovered Bacchus’ 2011 S/T masterpiece.

With that being said, Grief Eater are an eclectic project, drawing influences from the obvious Noothgrush and His Hero Is Gone but combining this with black and death metal brushstrokes to create something unique and utterly heavy. This is the soundtrack to a land’s overlooked dark past, grey present and uncertain future. Check out Grief Eater’s beautifully crafted ugly beast on Distro-y Records now. 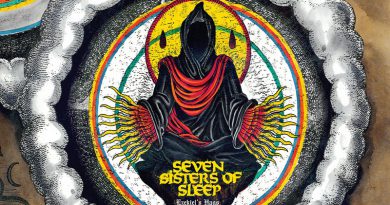