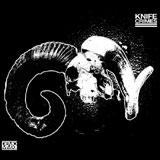 Knife Crimes. Like the names of their influences in the metallic hardcore scene (Brutality Will Prevail, Hang The Bastard and Crossbreaker) theirs is a name that arrests you with suggestion of seedy violence and a world that has got a very ugly side to it. Formed in Manchester in 2011 they have sadly just called it a day this month. In this short existence they recorded a three track demo which sold its limited run and can be obtained from their bandcamp page.

This four track EP Demo MMXIII is a fittingly nasty farewell from a crew that sounded like they could mature into something decidedly welcoming in the British scene. This is black hearted hardcore music, with weighty, spiteful lyrics of anguish spat over sounds that Converge would be proud of.

‘Heathen Reign’, the opening track showcases this perfectly. Surprisingly melodic and yet capable of sounding like Iron Monkey or Murder One, the band rock along at a decent tempo before picking the right moments to drop into a great piece of groove.

‘Cold Cross’ is far more furious and unhinged, but no less enjoyable as it steams into the double bass work out half way through and it’s almost singalong ‘Like a lamb to the slaughter’ refrain. It is the type of music that would see dingy clubs exploding with bodies and beer all over the dance floor.

Despite its sedate introduction ‘Burnt Eden’ offers little respite with its breakneck verses and roaring chorus and guitar histrionics until it slows to its huge grinding middle section and deranged swing. The closing track on the demo is a high tempo affair that is that descends into a vicious gang chorus that leaves you breathless with its trademark drop out before it rounds off with a massive defiant chug.

Ultimately it is with a more than a tinge of regret to discover this band as it screeches to a halt. The members continue with other projects and Witch Hunter Records are slated to put this out as a CD. If you should get a hold of a copy then it is more than worth grabbing a it and lamenting what could have been.