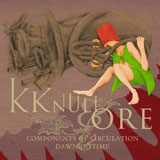 The A side, ‘Components Of Circulation’ is an eerie and tremulous foray into a post-Carpenterian (as in John Carpenter, not The Carpenters) landscape of melancholic minor notes, almost reminiscent of something off the hallowed ‘Escape from New York’ sound track. Now that is a recommendation. Inhumane noises, like a huge sucking sound (as if wrought from the belly of some titanic subterranean circular-gobbed worm), creep in out and of the mix, lodging deep in your befuddled nervous system like the memory shards of a car accident. For saying it is five and a half minutes it feels like it’s over far too soon, leaving me wanting to listen to a whole album of the stuff. Still, we all love the seven inch format don’t we? It’s just too cute and collectible to dispense with.

The AA side, ‘Dawn Of Time’, features the same unsettling static crackle as the A side, yet also features something that sounds like samples of birdsong. I think it is samples of birdsong. Maybe tropical birds. Maybe zebra finches. I’m not too sure. Bill Oddie would help here (if he wasn’t so curmudgeonly), but again, it’s eerie (too eerie for Oddie, it would tip him back over the edge). It should be comical by rights, but in fact it is undeniably odd in a very serious way. Again, it’s all over too quick, which makes me wonder if the seven inch was the most appropriate format for such profound and experimental noise such as this. Then again, why not. It seems quite a perverse choice of music for a format that is so closely associated with the classic pop single, and maybe it works precisely because of that seeming contradiction. I’d have loved this to be the Christmas number one, pushed up there by a concerted effort of wilfully anarchic bloggers, facebookers and tweeters, all hell bent on seeing KK Null and Ore in the top spot, with their electronic bird chirps and onerous foghorn blasts.

Sterling stuff anyway, and definitely worth a few quid, particularly if you dig random electronica and fearful dystopian visions.