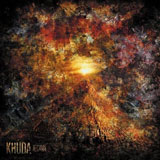 Leeds’ Khuda are an instrumental post-rock duo that create brooding, angular music with some heavy rock overtones but for the most part they build complex layers of guitar with the aid of digital delay and a loop station, all over some pretty sturdy drumming.

Opening track ‘Seia’ is a simple start to the album, one that will give you a taste of what is in store, and for a band that has a great live reputation as a heavy band they surprise us by not using distortion pedals very regularly. Khuda manage to be heavy using clean guitars and when they do bring some fuzz to the table it’s usually to add a grimy overtone to an otherwise pretty assembly of chords as in ‘Boreas’.

‘Luka Mesto’, with it’s demented off-kilter riff shows that other skitzo rock acts such as Hella and Lightning Bolt may be an influence, but the second half of the song plays into more familiar post-rock territory with moments of quiet melodics giving way to explosions of noise. ‘Don Benito’ is similar – it’s a great, emotional, kinetic song based around a slowly unfolding riff. On the other hand ‘Marchmen’ and ‘Tyche’ rock pretty hard but a sense of inertia pervades both songs and they fail to do anything particularly memorable. It’s like they’re both on a one-way road to nowhere.

That’s the problem with the album; Khuda do what they do well, but some of the songs are a little bit anonymous. ‘Seia’ doesn’t make itself intersting enough and ends so abruptly that we thought the CD had skipped and title track ‘Iecava’ suffers a similar fate, washing over us without leaving much of an impression for better or worse. Some of the songs are too content to provide slight variations of the same riff for upwards of five minutes and while this occassionally demonstrates the diversity of their musical influences it doesn’t show much in the way of innovation. It is hard for instrumental bands to grab (or maintain) a listener’s attention; bands like Tortoise and Do Make Say Think may stretch an idea out for a long period but they reward patience with interesting diversions, subtleties, unexpected layers and well thought-out structures and while both those bands have more members to contribute to the creative process and the overallsound, Khuda could do with thinking more about structure and keeping things interesting for the listener.

Conversely, ‘Haikyo’ is the best example of what Khuda do well. Throughout the song they build subtle new layers upon a foundational riff to create a beautiful tapestry of sounds then change it up about half-way through to add some variety to the whole song so it feels like we’re going somewhere. When the song is about to erupt into what should have been a huge distorted outro they bring it back to the opening foundational riff – they play with our expectations and then throw them back in our faces wonderfully.

Any criticisms that I have thrown at Khuda should be taken with a huge pinch of salt and a shot of tequila. Instrumental music can split opinion like no other and there is no shortage of musical and compositional skill of offer here. Iecava is an album that you could definitely have on in the background and let fill the room but don’t expect it to grab your attention. There is a whole contingent of music fans that will love this album because it sticks to a formula but this reviewer would like to see Khuda innovate a little more as it feels like we’ve already heard this album before. You may have noticed some contradictory comments in this review but they effectively reflect how I feel about Khuda. I like them – they’re very good – but there is something missing from Iecava that prevents it from being as good an album as it could be.