Wielding a psychedelic 70s vibe, Book Of Wyrms drop their acid sci-fi metal music out of their home-base of Richmond, Virginia on the east coast of the USA. Back when I was turning over the rocks looking for new bands of the growing doom scene, I grabbed a copy of their debut disc, 2017s Sci-Fi/Fantasy and enjoy it I did.

The band’s new release Occult New Age is their third full-length effort of eight tracks, a solid and engaging work that packs the muskets for fans of Samasara Blues Experiment and Hawkwind – big time on the Hawkwind stylings – but without the interstellar overdrive and more black majik floating in the songs’ ether.

I can feel the beat, yeah … Meteoric Dagger bumps and boogies with Sarah Moore Lindsey’s vocals enveloping the song in a breezy five and half minute Hope Sandoval spell that alternates boogie with laid-back Haight Ashbury street sense… majik makes a difference, it just keeps on growing… Colossal Yield could be a song about an award winning purple skunk plant strain, but surprises me with its guitar production that tunes in a four-hole, non-master volume Marshall amplifier and spreads the sonic temple love, like the early Judas Priest guitar tone found on their seminal heavy metal offerings Sad Wings of Destiny and Killing Machine. Judas Priest? The hell you say? I say yeah verily, and this authentic and singular flavour of amplifier worship is stretched out all over Occult New Age.

Albrionlilly is a neat-o little interlude of classical gas guitar that sounds straight outta Richie Blackmore’s old Rainbow riff reel. At eight and a half minutes, the snazzy snizz of Hollergoblin lets Jake Lindsey off the leash to take his bass out for a rousing romp to pee on both the Lemmy Kilmeister and John Paul Jones hydrants, while throwing down License To Ill – dis man got bass ballz.

Speedball Sorcerer (whatta song name!) brings a southern-fried acid boogie with a smoky Skynyrd guitar lick that does the deal then shuffles off into the cloudburst of Weatherworker, raining Sid-rock and jazz inflected guitar torrents with add-on but off-shore synthesizer flourishes, just like my Gramps used to play, and he knew Sid – he did.

Book Of Wyrms is the kind of band that you’re always happy to see and let them do their thing, that thing being strong music played by an able band with a lady singer rising above the acid din, a psychedelic tightrope walk that maybe only a feminine touch can manage in the Circus Maximus that stoner and doom is charging towards. The mix and master on Occult New Age is very good. Have a listen and then chant after me ‘We is melting down Brothers and Sisters!’ 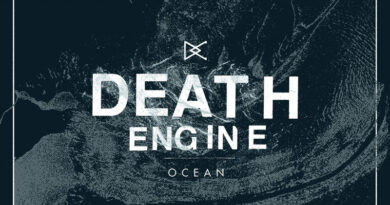