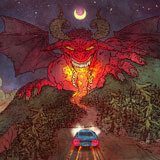 OK, how many awesome albums are there out there that have truly awful covers? Plenty…Flotsam And Jetsam “Doomsday For The Deceiver”, Aerosmith’s self titled debut, Anthrax, “Fistful Of Metal”, Black Sabbath “Born Again” (yes it is an awesome album!!!) to name a few. Don’t be put off by the awful 80’s thrash type sleeve that adorns this release as within the horror lurks a damn fine ass kicking album the like of which Small Stone have excelled in putting out for over a decade now.

It is fair to say that Small Stone have confounded our expectations a few times lately with some excellent yet uncharacteristic albums but alongside Roadsaw and Dixie Witch it seems the guys are back on track with Infernal Overdrive’s brand of hard rocking, hard drinking old school boogie rock and roll. Opening track “I-95” is a slinky Blackfoot style groover while follow up track “The Edge” stamps its foot to the floor with equal parts vintage Ted Nugent and Van Halen when they still had a fearsome set of cojones!!!! “Duel” rocks along on a riff that’s imported from the heart of the Deep South and a beat that wouldn’t be out of place on an old Motown rabble rouser.

This whole album exudes a seductive, smoky vintage vibe, check out those guitars, do I detect the smell of some old school burning Marshall valves? This is the sound that gave UFO and The Scorpions their edge in the 70’s and give Infernal Overdrive a level of authenticity that few bands achieve. These guys aren’t all about the heavy, they’re all about the good time, the beer and the chicks…like some backwoods forgotten cousins of Montrose and Kiss. When vocalist Marc Schleicher asks “Can I be your little animal” on Cage you almost expect Paul Stanley to be nodding his approval in the background…in full make up and stack heels!!! As the band powers through a wah wah ridden, amphetamine driven freak out you may question if these guys have heard any music made within the last 30 years!!!

Infernal Overdrive break out their inner Molly Hatchet with the killer boogie of “Deported To Jersey” which is given an irresistible lift by the spot on harmonies not to mention the fantastic tension build up and release during the mid section. The closing minute and a half of this track is as good as anything else you will hear this year or next…yet Infernal Overdrive are able to tag this on as an outro…that should tell you something!!! On “Electric Street Cred” the band retain their tough, edgy sound but imbue it with a little more texture and layering through the guitars and subtle use of keyboards to show that there is more to these guys than simple, dumb rock and roll. The fact that they include a drum solo half way through without any hint of irony shows they’re not afraid to put their balls on the line and also that they have no regard for the modern constraints that make so much modern music lifeless and sterile!!!

Infernal Overdrive truly wear their hearts on their sleeves with a cover of Ace Frehley’s “Rip It Out” from his 1978 solo album. Forget those other two preening ponces in Kiss, Ace was the man with the burning rock and roll heart and Infernal Overdrive are all too aware of this. It is a decent version but I can’t help but think all this has going for it over Infernal Overdrive’s own compositions is familiarity. In all honesty this is quite possibly the weakest song on the album…and I mean song, not performance. Step aside Ace, Infernal Overdrive don’t really need your help but maybe you could drop them a letter to thank them for the royalties!!!!

After seven pocket sized nuggets of solid gold rock and roll the band roll up their sleeves and flex their guns on the closing track “Motor”. At over 13 minutes this does, I believe, qualify for the term “epic”. In true southern rock style the band have saved their piece de resistance for last as the track swings from a laid back verse to a big assed chorus to unison lead playing and sub psychedelic tones. When it works, this track really works, it works as well as anything else on the album but its attempts at grandiosity are also the thing that cause the only small dip on an otherwise excellent album.

Slated for a release in early 2012 it’s clear that Small Stone are showing no signs of resting on their laurels just yet and with a new Sun Gods In Exile album to look forward to it’s clear that rock and roll is back with its feet firmly under the Small Stone table. 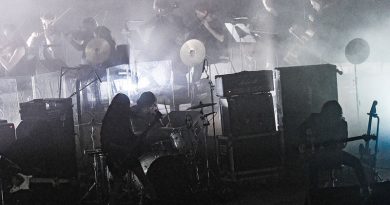 Review: MONO ‘Beyond The Past – Live In London With The Platinum Anniversary Orchestra’