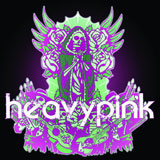 That Tony Reed is a clever bugger and no mistake. The mainstay behind both Mos Generator and Stone Axe takes yet another step into recorded sound with this latest project, Heavy Pink. This time around this is truly a solo effort; Reed wrote, played, produced, recorded and mastered the entire thing himself at his home studio. Not that you’d be able to tell as the recording is so full and deep you would swear this came from the bowels of Abbey Road Studio 1 in about 1970.

There is a familiarity to this recording that will certainly please fans of Reed’s other projects, his song writing style is so ingrained that it is possible to draw lines of reference to Mos Generator and Stone Axe but whereas the former draws from vintage rock and pushes it through a modern blender and the latter pays wholehearted tribute to a bygone age, Heavy Pink explores a broader, more lush and psychedelic soundscape.

Opening cut “Flower and Song” draws the listener in with a more familiar sound. This can best be described as the most “conventional” Reed fare in that it is the most obviously song like track here in terms of structure. It’s a slow, lazy, hazy ride through big rich guitars and a sublime floating melody. If one were to draw lines of reference to Reed’s other work this would come closest to some of the vibes laid down on Mos Generator’s more experimental prog influenced album “The Late Great Planet Earth” but this succeeds in exceeding that album in terms of sonic depth. The guitars are multi layered, completely at odds with the Stone Axe philosophy and tones vary from a rich distortion to a cleaner, David Gilmore inspired lushness while the whole things is subtly enhanced with bells and extra percussion.

Flip this slab of wax over and “There Is A light” presents further challenges to the listener but ultimately greater reward. Starting with some titanic driven chords the song quickly gives way to a lone chugging guitar. Over the space of the next 5 minutes Reed then proceeds to layer guitars and vocals over this sparse base with beautiful counterpoint harmonies and rich orchestration. The effect is not unlike some of the darker tracks on Pink Floyd’s “The Wall” as the sense of tension gradually builds to a heavy and devastating yet gorgeous climax.

At only two songs this is way way too brief. Reed would easily be able to sustain this style over the course of a whole album and keep the listener mesmerised and enthralled throughout. This is such an irresistible listening experience that it’s hard to fight the temptation to put this on repeat and just keep listening to it. For those of you buying this lovely piece of vinyl, however, there is a tasty extra bonus as this comes with a download code to get a digital, ipod friendly version of the single tracks plus an exclusive, download only bonus track entitled “Long Live the Mellotron”. As one might expect this is Reed’s exploration into one of classic rock’s most overlooked yet expressive and mournful instruments. This semi instrumental (there are voices in he background but nothing that could reasonably be considered a lead vocal), seems to draw from Holst’s “Mars, Bringer of War” and Genesis’ “Watcher Of the Skies” with a nod to some of the more experimental excursions Sabbath made in their drug fuelled heyday. Bolstered by drums Reed creates a fantastic wash of sound that proves he doesn’t need guitar to rock!!!

With Stone Axe’s star very much in the ascendant and Mos Generator back in the saddle, not to mention Reed’s increasing popularity as a producer it does make you wonder how much further time he will be able to put towards this project but if he doesn’t sneak some more Heavy Pink time into his agenda the world of music will be a slightly sorrier place!!!

This release is limited to 300 copies that come with stickers…etc and is selling very quickly so don’t be hanging about, get your credit cards out and get it now…and go buy a turntable if need be, this is worth it!!!