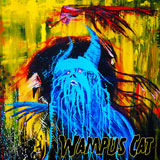 Knoxville, Tennessee’s doom boogie band Wampus Cat isn’t your average, Craigslist-classifieds-built-band. A husband and wife team of Andrew and Courtney Bryant make the rhythm section, with their brother-in-law Jordan Sangid on guitar/vox, and his long-time friend Bill Bridges on guitar/samples. The joke is made that they’re like the Manson Family Band. I guess so. In a recent conversation with Sangid, I’d asked him, after talking about a bunch of guitar gear, “So, in the end, what’s your band all about?” His reply? “Riffs and being evil.”

And I’ll be damned if it isn’t. His band’s self-titled record is a smattering of hulking riffs, desperate vocals, and Satanic imagery. Buzzing vintage tones, wailing feedback, caveman drums, and devilish samples. It’s all there, kids. It’s a record the local church would send out pamphlets about.

The opening track, ‘Wampus Cat’ opens with a riff you’ve heard a million times, but want to hear a million more. And while you’re rolling along, thinking you know what’s going on… BAM, the band hits us with a quick shot of punk rock fury. Influences like Sabbath, EyeHateGod, Weedeater, and even a bit of Snail all before the first few minutes are over. And it’s in the opening track that something interesting occurs: it’s linear. There’s no set structure. I’m waiting for the initial riff to make one last, grand appearance and…nothing. Ha! Those dicks!

More atmospheric feedback leads to the next tune, ‘Swamp Witch’. All kinds of Sabbath influence in this, the biggest being a complete breakdown featuring some tried-and-true, Iron Maiden, galloping guitars. Shit never gets old; only better. The band knows groove is key and all of the tempos are just so.

Their own bio says simply, “H.P. Lovecraft inspired lyrics with Iommi inspired riffs.” And that’s really about the long and short of it. Big, hulking riffs with vintage tones, stretched out to the farthest reaches of doom-kind. ‘Ancient Ones’ finds a fantastic vocal melody over a Kyuss-esque riff. Here’s where the real evil and Lovecraft starts to rear its horned head. Slow, while vocals tell the tales of hell coming to earth, judgement day. Listening through headphones, it’s a scene to behold in the listener’s head.

‘Doom Buggy’ finds the band returning to the plow for some more heavy riffage. One after another, the riffs pile up like a train wreck. There’s about a half-dozen riffs in this instrumental that could be tunes all on their own. It’s a run through of goodness, including a quasi-blast beat that comes out of nowhere! Again, almost completely linear. Like Atomic Bitchwax’s ‘Local Fuzz’ record, you get the riff for a few measures, then it’s gone forever. Or until your rewind that shit.

‘Ancestor Worship’ shows more horsepower as the band delves into their own local lore. Religious practices in the Appalachians of South are brought to light mid-way through this record. As a Yankee, although I grew up rural as anyone, the idea of snake handling in a dingy, backwoods, southern church is as creepy as anything the devil could conjure. This tune is pretty simple and straight-forward stuff and provides fantastic background fodder for the righteous sampling; exposing and showing pseudo-admiration for these practices that still go on today. Or so I read in the papers. Sometimes.

‘Sloth’ is just like the title. A vast, spacious riff in no hurry to go anywhere. Followed by another. This is the closest the band gets to the droning and considering it’s the only bit of the record like it, it’s a welcome mood. Rounding out the record is the meandering ‘Wizard Tusk’. A nine-plus-minute instrumental of guitars, keys, and moodiness that blasts into a ballsy riff after five minutes that shows off the power of the band and specifically the drummer, Andrew. It’s all about groove. Never forget that.

And it’s sort of odd to say it this simply, but the band “sounds good.” That seems simplistic, I know, but let me explain. In the pursuit of all that it heavy, some bands have a tendency to either tune so low that all melody is lost. Or they’ll drive that silicon fuzz so hard, it’s harsh and difficult to listen to. But Wampus Cat‘s record is warm and sits in a comfortable frequency range. The listener can make it the whole way through without grimacing. Don’t get me wrong, it’s still super-heavy stuff that hangs with anything in the scene, but ya don’t need to pretend you enjoy it (Admit it, you’ve done it).

I don’t know what the band’s plans are or if they’re looking to tour/record, but Wampus Cat‘s debut self-titled record should have you seeing their back patch on a denim jacket near you soon.