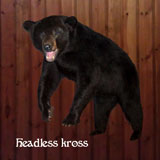 Bear with a fucking sore arse more like. This 40 minute album (download it from bandcamp) of six songs by whisker-chopped Glaswegian power-trio Headless Kross hammers down the riffs like Vulcan on an inspirational day at the forge – a case of Ursa Minor chord/Ursa Major chord. The opening number, ‘From The Dark’, sets a brutal and barbarous temperament for the rest of the recording and reveals HK as a righteous and supremely pugnacious collective of hellishly focussed sonic aggravators who prostate themselves in exultation to the curative and cathartic might of the amplified chord change. One will be reminded of the grand wallop of such noble acts as Weedeater and Crowbar here, but once the drums kick in proper we have a more dark and maybe more industrial beast, one splattered with an acrid metallic hardcore as much as anything else, but like the aforementioned Carolina super-smokers, one that is intrinsically shot through with sludgy blues malice.

‘Plague Stone’ follows in similar suit, another behemoth riff that stretches out and melts into arpeggio and back again. It would be good to hear Derek’s vocals a little higher in the mix methinks, as his throaty and mean little strangled rasp plays second fiddle a little too much to the power of the overall sound.

‘Burning Hammer’ is an obvious choice for the band to make a video of – a corrosive and truculent seven minute knock out that perfectly melds the warlike thrust of HK’s heavy and compressed sound with a more psychedelic expanse, as the guitar phases and warps over the undulating rhythm in a manner that prompted me to think of the mind-expanding intentions of sterling acts like Neurosis and Ufomammut. ‘Anatomy Lesson’ again employs individually picked notes chiming over the bass and drums (sounds like post-rock but it isn’t), giving way to soupy thick riffing that throbs and hums and blankets the rhythm like a carpet of cloying electric dung, punctuated at times by almost bizarrely jarring blues riffing that shouldn’t work but does.

The closing track ‘Drought’ seals the album with the last titanic and Stygian blast of amplified intent. HK are a band who, like fellow Glasgow noise-mongers Black Sun, really spit out the black bile of the post-industrial gloom of the rusting wastelands surrounding the once-imperial splendour of Glasgow’s city centre. Also, like Black Sun, I detect that HK are capable of growing and evolving over time because of the sheer mastery they have over their instruments. For a relatively new band this is a monstrously assured and confident album laden with cortex-pounding drums and astoundingly leviathanic guitar oppression that will surely impress the majority of you out there in riffs, spliffs and misery land. 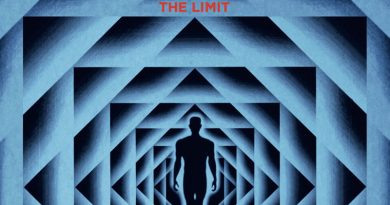