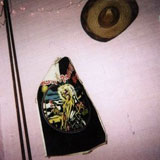 Where most bands like to play it safe in today’s climate, occasionally a band will come along that confounds expectations, buggers preconceptions and sticks a gnarled shit stained finger up in a gesture of “fuck you” defiance. Harvey Milk play by their own rules and after an absence of several years have burst back onto the scene with a contender for album of the year.

The original incarnation of this band from Athens, Georgia, named after an openly gay US politician who was assassinated in 1978, seemed to fizzle out in the late 90’s after releasing a string of albums and singles on various labels. The intervening years have been vague but judging by this release you would have to think they were pretty unpleasant and traumatic. Surely only severe mental pressure could inspire such an oppressive, brutal and schizophrenic record as this. This is the album that makes all death metal bands sound like a flea farting in a hurricane.

Now featuring the mighty bass behemoth that is Joe Preston, formerly of The Melvins, High on Fire, Thrones…etc, comparisons with The Melvins will be inevitable. Both bands tread the same sludge rock meets alternative weirdness path but where the Melvins have tempered their sound in recent years, Harvey Milk are playing out the soundtrack to a retard picnic in Hell!!!!

Opening track “Death Goes to the Winner” lulls the listener into a false sense of security as a lone guitar picks out some seemingly random clean chords, accompanied by an angelic, almost Gregorian vocals before pandemonium breaks loose in a maelstrom of doomy, crushing guitars. Ladies and Gentlemen, will the real Harvey Milk please stand up!!! The assault from here on is relentless as the band whip up a storm of noise that visits the Electric Wizard meets Melvins grind of closing track “Goodbye Blues” to the Amphetamine Reptile/Jesus Lizard style ball of aggression of “A Maelstrom of Bad Decisions”. The noise and grind are underpinned, however, by a nagging sense of melody. At times the band sound a classic rock band thrown into Satan’s meat grinder, “Motown” actually sounds like a warped Thin Lizzy 45 being played at 33RPM!!!

My dear departed mother was appalled when I brought home a Sex Pistols album at the age of 15, if she’d heard Harvey Milk she may well have packed me off to a monastery for my own safety!!! This is one of the heaviest, angriest and most challenging records you might hear this, or any other year and for that reason alone everyone should buy it. As the ripped Iron maiden poster on the front cover would suggest, out with the lame, in with the Milk.