Love them or hate them (and make no mistake, read the comments of any social media post and you will see), New Orleans sludge titans are a polarising band, but they cast a very long shadow on the scene. It is therefore quite hard to make a sound that comes close to them as comparisons are going to be inevitable. That said, in my opinion, EyeHateGod are just about the best to ever do it, so as far as test subjects for emulation go, you may as well aim high.

That is not to say that Grim Earth, the hardcore/power violence influenced sludge metal outfit from Olympia, Washington are merely a clone. For the last five or so years they’ve been fiercely ploughing a path through the independent scene making downtrend, low-fi distorted anthems for the disenfranchised over the course of a demo, two EPs, and their 2019 debut album, Smoke Bloody Nugs.

For those unfamiliar with the band, In The Throes Of Madness sees them make progressive songwriting steps towards a filthier direction that drops the more stoner infused vibes and bounce from some of their previous material and the earlier dalliances with clean vocals. Instead, the band lean into their sludge metal and hardcore sides that calls on the likes of the aforementioned EyeHateGod, British sluggers Iron Monkey and Mike Pike’s High on Fire.

Right from the moment Equalizer barrels in with the quiet, urgent introduction, there is the hardcore punk side sound of buzzsaw guitars and low-fi production (actually this is way better than previous efforts which seemed accidental, rather than a chosen aesthetic) they do come across like a blend of stoner and sludge. Craig Moore’s vocals will naturally draw comparisons to Williams and the departed Johnny Morrow with his guttural, almost vomit like delivery, and whilst they do stop and turn on a feedback drenched dime, there is a conscious attempt to blend in groove underneath the crust splattered exterior.

Sick Fuck (Part 2), the follow up to an earlier composition from their weed laced 2019 Stash Of The Damned EP, takes the Sabbath influenced heavy blues plod and marries it to some jarring, unsettling string bends that are designed to set you on edge, before the band once again charge off on an eye wincing series of off kilter changes before the finish stutters over the line.

Foul And Rotten channels this ferocity into a far straighter forward groove that feels like Moore is the devil (or angel?) on your shoulder screaming into your ear. Less concerned with trying to keep the listener on their toes, this is Grim Earth focusing on a bullish attitude that continues on the full tilt Black Tar Blues. The latter is definitely a rabid High On Fire style that brings back the real snotty punk belligerence, the same can be said for Unforgiving Existence with its same up tempo snarl.

If there is one thing to credit Grim Earth for it is their continual improvement, In The Throes of Madness is huge leaps on from their previous material and there are moments where they sound every bit as feral and nasty as they want to convince you that they are. If there is fault to be had, it is that they are competing against an extremely high benchmark.

What makes EyeHateGod so good (or bad depending on your opinion) is they genuinely sound like they’re going to become unglued at any moment. Given the personal lives of the people involved, this has been a stark reality over the years, but for Grim Earth they sound like they have this under control. The calmer, smoother stoner elements pour oil on the troubled waters, and unfortunately some tracks, particularly towards the back end of the album, like Saturated Situation and closer Eaten Alive come across as a little formulaic and deliberate.

However, the band can string together some great moments and there is always a headbanging riff right around the corner, and when they do hit their stride, they can produce tunes like In The Service Of Madness which comes across like Iron Monkey having a bar fight with Slayer while DRI provides the alcohol and baseball bats.

Grim Earth provide the perfect remedy for a terrible day. They want to hate the world for all the shit it throws at you and have delivered a soundtrack that will have you dreaming of punching your boss/a lying politician/a reality TV ‘celebrity’ in their smug face (please note The Sleeping Shaman does not condone such actions). If you’re a fan of sludge, hardcore and power violence then you could do worse than check them out when you have grown tired of spinning A History Of Nomadic Behaviour. 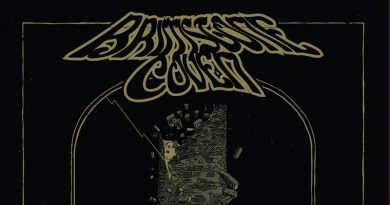