Sweden will be forever celebrated in metal circles for the Stockholm scene and the Gothenburg sound. Also a country known for its progressive outlook and forward-thinking ideas, it’s now managed to serve up something entirely different in the form of Gold Spire, and the quintet’s Self-Titled debut certainly makes for an attention-grabbing listen.

Fittingly-titled opener Day Dawns Dark sees Gold Spire rising from their collective slumber, introducing themselves in unassuming style as they meander into view. As the players gradually take their places on this most fascinating and absorbing of stages, you get the impression you’re in for a long and varied ride. This theme continues as they merge seamlessly into Headless Snake, where their extraordinary sound begins to make its presence known. It’s worth pointing out that Gold Spire isn’t the first extreme band to walk an experimental path. Cynic, Ephel Duath and Pestilence have all embraced their inner jazzers over the years, but it’s the confidence with which the Swedish quintet do so that really sets them apart.

The album features some striking, contemporary jazz sax from Magnus Kjellstrand throughout, weaving its way seamlessly between guitar, bass and drums. This is not manic, Zorn-like bursts of frenzied noise however, rather a layered discordance that put me in mind of Mel Collins’ work with King Crimson. Then there are the vocals of seasoned scene veteran Heval Bozarslan. Delivered over the record’s consistently doomy pace, they often come across as an uneasy alliance of early Opeth and Esoteric, albeit without the uber-echo!

Further into Gold Spire, and The Old Bridge sees the tempo escalate all the way up to a double-time rock beat. There’s even some chug-laden riffing and driving double bass drum work which leave no doubts as to the creators’ extreme metal pedigree. The clear, open space of Gloria is reminiscent of latter-day Enslaved at its most wistful, yet make no mistake, the progressive elements are not simply nodded to by the band, rather forged into a well-crafted weapon that’s expertly-wielded with precision.

‘Prog’ is a banner that’s perhaps held aloft too much these days within metal, and for me, it takes rather more than a long track split into multiple parts to be truly progressive. By enlisting the expert help of the aforementioned Kjellstrand and progressive rock bassist Petter Broman, however, Gold Spire are effectively embracing the term and all that it entails.

That’s not to say the more traditionally ‘metal’ instruments take a back seat. Founding brothers Erik and Påhl Sundström conduct proceedings with authority throughout. There’s some thoughtful and beautifully-crafted guitar passages from Påhl that come and go throughout this multi-layered album, sometimes taking centre stage, at other times underpinning the rock-solid yet creative rhythms. The drums are on occasion utterly driving and at other times totally laid-back with a lounge-like sensibility; a testament indeed to the skill and versatility of Erik Sundström.

By the time the menacing Skull Choirs looms into view, you think you’ve heard everything, but then it’s Morbid Angel-esque intro passage turns into a black n’ roll-with-sax groove that’s bordering on – dare I say it – catchy. That’s the thing with this album; there’s so much going on, but it never once sounds like a disparate concoction of random ideas. It’s so well executed that it comes over as the most natural thing in the world for everyone involved.

The Wayfinder ties things up neatly with a building tension that makes it the perfect closer, and as the last saxophone note drifts away, you’re left with a sense of something rare and special – an expertly constructed album that doesn’t beat you over the head with its progression and technicality, rather lets you step into its compelling world for a while. 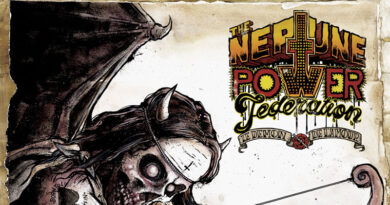