For a long time, deep growls were essential in my heavy music choices. While that is still true, bands like Book of Wyrms, WyndRider, Blackwater Holylight, and now Godless Suns have opened up a world of heavy music with female lead vocalists. It’s not something new, but for me, it was uncharted territory and one I’m excited to explore.

The album art grabbed my attention. The colors and artistic rendering of a sun and shadowy figures is fantastic. Godless Suns we’re kind enough to share how they created it with AI art and opened up a new obsession. But we are really here to talk about the music within so let’s get into that.

Lord of the Rings immediately comes to mind with vocals reminiscent of Galadriel when she is overcome with the possibility of taking the ring. The multi-layered spoken voice intro is very cool and backed by a fuzzy groove that is welcoming. Immediately, we are off to a great start. One Spark Of Lillith is the first impression and it’s crunchy tones stand out immediately. There is groove on the heavy side and I’m all about that. The track weaves through various parts seamlessly over its seven and a half minutes, then transitions perfectly into Death Of The Wise.

A Hendrix style riff opens the track, but my first thought however was Josh Pilots fantastic intro to Valley of the Suns Sweet Sands. It’s blood pumping with thunderous drums, chugging riffs and a face melting solo. Long chords ring out setting the tone for the follow up track Fury.

The intro to Fury is very familiar and I cannot put my finger on it, but I like it… a lot. The acoustic riff with strings buzzing is always a cool sound and transitions effortlessly into the distorted riff. Vocalist Sara Humphries stands out on this song with the instruments scaling back allowing her voice to soar. Towards the end, the drums taper off and a trance inducing chord progression chimes in. It’s slow and calming with just enough break up that’s one of my favorite sounds.

A reverse droning chord provides a nice transition from Fury into Purgation. This album is meant to be one long track that should be listened to in its entirety. That’s apparent with the smooth effortless transitions into each song. Purgation is slower paced while remaining heavy which ignited my love of doom. This feeling continues into Bones with great bass work by Sara and melodic fuzzy guitars over the top from Dan Swann. A fantastic setup for the grand conclusion.

The title track Godless Suns closes out the completely DIY album. The precise crashes of the cymbals and snare/tom hits of Pete Humphries impeccable drumming carry the songs weight. Sara’s vocals are powerful and forward in the mix, highlighting her range and with a hint of Rush. Intense riffs build up to an explosive solo and the track finishes with more Lord of the Rings spoken word vocals to warp everything up cohesively.

Godless Suns came out of the left field and surprised me with a fantastic album. Highly inspiring knowing that everything was 100% DIY which I always have a lot of respect for, especially with knowing how hard that can be. I look forward to hearing more from the band. 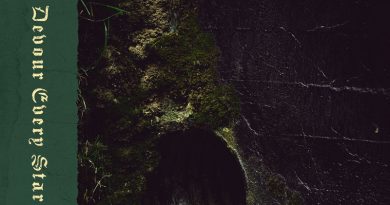