There’s always been some kind of mystique involved when talking about Gothenburg-based Goat. They appear to be a very secretive group, with the obvious fact being that they wear masks and costumes. But when trying to dig a little deeper there are only a handful of interviews (of which only one or two were conducted face-to-face), and their backstory even claims that ‘Goat’ is only one reincarnation, spanning over 30 or 40 years, of a group originating from Korpilombolo, a small voodoo-worshipping town in northern Sweden.

The sound of Goat (which their backstory might hint at) is very distinct, blending western music traditions such as psych rock and jazz with afro-beats and tribal rhythms: It’s as loud and fuzzed-out as it’s groovy and psychedelic. Their fourth studio album Oh Death follows 2016s Requiem, which was more acoustic-oriented than their first two albums World Music and Commune. The new album sees a return to the loud, afro-beat infused psych rock with a few tracks revolving around acoustic and percussive instruments. Oh Death is released on 21 October through Rocket Recordings and Levitation.

The psych rock influences are clear from the opening track Soon You Die, starting out with a noisy back-and-forth riff drowned in fuzz. There’s a strong ‘60s vibe on this slow groover composed of short verses with long instrumental passages in between, where the band just let it all out in psychedelic jams and guitar solos. Fronting the group are two female vocalists singing in unison at the top of their lungs, making the instrumental parts all the more powerful and intense. The vocals, I think, really solidify the very distinct sound this band has.

trippy and wild afro-beats with jazz infused psych rock, louder and more aggressive than Goat has ever sounded..

Several tracks are built around psychedelic grooves on Oh Death, like the lead single Under No Nation; a fusion of psych and afro-beat with lots of percussion layers, following a similar formula of vocal-driven verses and instrumental passages. The layers of percussion, as well as the fuzz-drowned expressive sections, really add dynamics and complexity, also evident on Blow The Horns and the remaining half of the track Goatmilk with the addition of flutes and saxophones. It’s chaotic and groovy at the same time, and it sounds very organic and colourful.

Between the very dense and loudly mixed psych rock tracks, there are two short intermissions (Apegoat and Blessings) as well as a handful of acoustic-oriented tracks, and in a way, these provide some breathing room. Tracks like Chukua Pesa and Passes Like Clouds are much more hypnotic with repetitive grooves and drones. And although these tracks are a bit different from the rest, they sit well with the album as a whole, being psychedelic in their own right.

Oh Death is an extremely well put together, cohesive and dynamic album. It offers trippy and wild afro-beats with jazz infused psych rock, louder and more aggressive than Goat has ever sounded, while the placement of the more mellow tracks offer variation and breathing room. The dense and loud production, as well as the vocals, makes every track intense and powerful, and the layers of effects and percussion add so much colour to the compositions. Goat has really outdone themselves this time and made their best album yet. 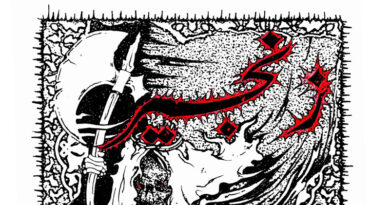