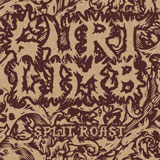 If there’s one thing Witch Hunter Records don’t do, its bogstandard everyday releases by mediocre acts in basic crappy jewelcases or over-priced downloads. In fact, its Chris Kay’s innovative and cost-conscious runs of beautifully hand-packaged limited editions and pay-what-you-want mp3 ethos that’s seen this Nottingham-based one-man label excel and excite with each new offering. This latest release – a full-bodied split between NWOBSA (that’s The New Wave of British Sludgy Awesomeness) upstarts Gurt and Limb – was announced with some subtle and highly secretive fanfare. Some simple artwork appeared simultaneously as the cover photos on both bands’ and the label’s Facebook page, building vital intrigue and plenty of digital Chinese whispers about the content. As it turns out, the ‘Split Roast’ comes in the unique format of a new original track per band, a cover version each and a further cover of one of each other’s past songs. Sexy.

South Londoners Gurt kick us off with a rollicking burst of bluesy doom in the form of newbie ‘Sophisticate’. ‎Since joining the band last year, guitarist Rich Williams and bassist Dave Blakemore have brought some much appreciated beefy grit to the Gurt sound and their riffs crunch and bite into the ears like Tony the Tiger devouring some giant pork scratchings. They still know how to swing as well as any Southern-fried metal juggernaught in the process though and lion-maned frontman Gareth Kelly’s howling bark soon fills the air with the kind of air-muddying bile that Iron Monkey’s Johnny Morrow used to specialise in. Simon Edwards’ timely wallops behind the kit keep the 4-piece unit tight as they chug their way through railway tunnels of harrowing sludge splendour.

Up next comes their cover; a bulldozing, slightly tongue-in-cheek but yet groovy-as-shit take on Talking Heads’ ‘Psycho Killer’. ‎Hearing Kelly spitting out the “qu’est-ce que c’est “s and “woah-oh-oh-ohhhhs” from that bizarre and classic lyric sheets brings a grin from ear to ear as the trio of instrument-wrangling maniacs behind him pummel the daylight out of those memorable hooks and swooping solos.

Selecting to take on the title-track of Limb‘s most recent EP ‘Gift of the Sun’, Gurt inflict more swing than a keys-in-a-bowl party into their fellow London sludgers’ classy riffs and downtuned grooves. Kelly’s throat sounds like possessed cement-mixer full of gravel as Williams veers skillfully between the sullen misery and upbeat rhythms of this four-minute death racket.

It’s time for Limb to retaliate and with the bruising opening line: “He will not save you or take your name” bellowed out by Robert Hoey at the start of new ‘un ‘Plague Doctor’ they clearly mean business with every note. ‎If Gurt are a cup of Joe thrown in your face, Limb are a smoother, but darker macchiato of fuzzed up doom with wig-out party riffs mixed in at every opportunity. The ‘Plague Doctor’ cackles by, all giant cymbal smashes and ego-shattering bass leads; formidable, yet punchy as heck.

Reaching out into the nether regions of Queen’s back catalogue for a track named ‘Son and Daughter’‎, Limb articulate a far uglier take on Brian May’s humongous riffs as Hoey bleats Freddie Mercury’s immortal “I… want… you… to be a woman” sentiment with a hoarse wail of deafening proportions. Following up with a close-out cover of Gurt‘s riff-belching ‘Soapfeast’ from their badass split with Dopefight, Limb vary the pace and slow the vocal lines down to a dulled crawl as they eep and slither through their sparring partner’s bullying brand of bastardised blues. Ultimately, this is a slightly less menacing and reasonably faithful version of the original track but it’s still interesting to hear Hoey’s rasping take on Kelly’s severe lack of giving a “cunting fuck” and Pat Pask’s lingering guitar lines sound pristine on this slab of beautifully British filth.

Limited to 150 carefully-crafted physical CD copies for the collectors among you, along with unlimited free digital versions for the masses, this ‎is yet another WHR release that’s well worth getting your mitts on. It’s great to see two relatively new bands daring to do something a little bit different and if this doesn’t whet your whistle for both Gurt and Limb‘s debut full-lengths due for 2014 release then you, sir/madam, are a silly hillbilly indeed.