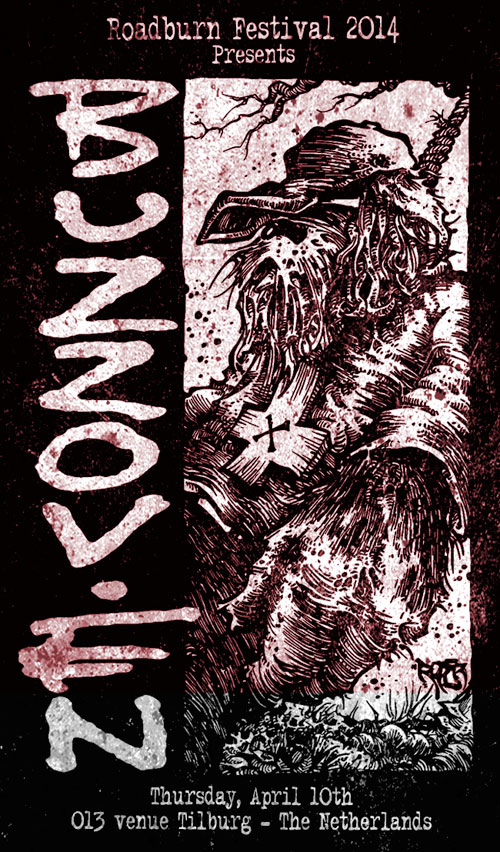 Roadburn 2014 is ecstatic to announce that sludge / stoner legends Buzzov*en will be making an extremely special performance, headlining the Thursday, Roadburn date, April 10th at the 013 venue in Tilburg, The Netherlands.

Formed in 1989 when heavy riffs primarily meant grunge, Buzzov*en brought a particularly virulent malice and filth to their music that often manifested itself in extreme violence at their live shows. Not surprisingly, given their level of intensity and their heavy touring schedule, their lineup was quite volatile and changed frequently.

Now remaining original member Kirk Lloyd Fisher (guitar / vox) has re-joined forces with bassist Dixie Dave (Weedeater, Bongzilla, Buzzov*en‘s …At A Loss) and drummer Ashley (To A Frown, Sore) to reform the band and bring them to Europe for the first time ever. Time (and sobriety) may have tempered Buzzov*en‘s shows to be less broken glass and blood filled, but the music remains as potent as ever.

“I’m looking forward to Buzzov*en’s rebirth being at Roadburn. I am gearing up to make our European debut an onslaught of swamp ass gutteral delusions. I have started my ascent out of my corner of HELL that caged me. With the help of fellow members Dixie, Ash and Floyd, we have chosen you all to assault first. Welcome to violence fuckers” – Kirk / Dirtkicker.

In the 12 years Buzzov*en was together, they released 4 LP’s (To A Frown, Sore, …At A Loss, Revelation: Sick Again) and 5 EP’s along with their legendary Buttrash demo tape. The influence of the band far exceeds their recorded output though, as Buzzov*en and Eyehategod are the forefathers of sludge / stoner metal and have made themselves household names in the metal underground through their frequent tours that spread the sludge gospel far and wide, and spawned countless musical offspring wherever they roamed.

Walter & Co feel extremely lucky to be able to bring Buzzov*en to the Roadburn Festival to give everyone a chance to experience their vitriolic riffs and rage filled performance.