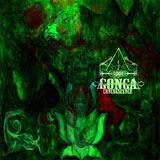 If ever a band deserves kudos for sheer dogged persistence and durability it has to be Bristol’s own stoner doom veterans Gonga. It has been an astonishing 15 years since the Elgie brethren of George on guitar and Tom on drums started the band and it’s been 10 years since their self titled debut hit the streets. 2008’s ‘Transmigration’ album saw the band moving away from their more Kyuss indebted roots into a darker, heavier more titanic sound that led them to the precipice of greatness. Then singer Joe Volk left the band. It seems that Joe left something of a large pair of boots to fill. His distinctive, husky vocals were something special and successor Matt Williams seemingly wasn’t able to fill the void lasting only a few months before leaving. Add to that a revolving door of bass players and the band would have been forgiven for throwing in the towel…but they didn’t. Solidifying as a three piece with bassist Latch Manghat they simply gave up on the idea of a singer and decided to go down the instrumental route. Now, here’s a little story. Many years ago I saw Gonga a couple of times and each time Joe Volk had been unable to make it so the band ploughed on and played the sets instrumentally and each time the lack of vocal presence didn’t in any way detract from the band’s sheer power and excellence. When I heard the new album would be all instrumental it seemed to me to just be the natural progression for one of the UK scene’s most vital bands!

‘Concrescence’ is, in many ways, a rebirth for the band…new line-up, new label and a new, yet distinctly familiar sound. Kicking off with ‘Miasma’ it’s clear that Gonga don’t do things by halves, its 10 plus minute duration crashes in with the mighty, weighty, Sabbathian doom we have come to expect from the band. One thing that is immediately apparent is that Gonga aren’t using their new found instrumental status to head down blind alleys of mindless jamming. Here the riff is king and George Elgie wrings memorable riff after memorable riff from his guitar whilst Latch Manghat compliments Elgie’s playing weaving around it in full Geezer Butler style. Manghat is clearly the perfect foil for Elgie’s guitar excursions and locks in with Tom Elgie’s propulsive drumming to create a formidable, constantly shifting yet impossibly solid rhythm section. The song ratchets up several gears around the half way mark and it’s testament to the band’s ability to keep things moving and interesting that a) you don’t notice the lack of vocals and b) you don’t notice that 5 minutes have already gone by!

If ‘Miasma’ is possibly the most obviously Gonga-esque song on offer here, and the best introduction to the album for old and new fans, it is with ‘Calumet Altar’ where the band show that their sound has really developed and allowed them to stretch their creative wings. A solid bedrock rhythm allows Brother George to weave some rather pretty textures on the guitar that, whilst still cloaked in fuzz display some almost folky and psychedelic touches and possibly betray that the band may have been dipping further back into musical history to some 70’s prog. There has, it can be argued, always been something of a folk vibe to the Gonga sound through Joe Volk’s vocals tone and melodies but this is the first time that I can think of where George has truly pushed this to the fore. One again though the song builds as it progresses, rarely standing still on one riff for more than is necessary and encompasses doom as well as George’s 70’s rock guitar hero aspirations without heading into masturbatory territory (try saying that pissed!!!).

‘Another Day Gone’ starts with a propulsive rhythm and a simple yet effective riff before dipping its toes a little deeper into prog with a dark yet twisting riff of the kind that King Crimson used to scare Geography teachers 40 odd years ago. At this point is should be noted that the production here has given Gonga far greater clarity than on previous recordings and works to the band’s advantage. George’s guitar tone is still full and piles on the fuzz but instead of threatening to collapse under its own weight, has a greater sense of space allowing the riffs room to breathe. Likewise Manghat’s bass sound is all encompassing yet never intrusive and makes use of interesting effects to add to the overall atmosphere of experimentation and other worldliness.

On ‘Mount Gonga’ the band become progressively freaky with its dark, sinister and unusual riffs. One does get the impression that not having a vocalist has given each musician the room to stretch out and explore their music within the context of the band. This sounds like a band enjoying their new found expressive freedom. In no way does this sound like a band who once had a vocalist and struggled to fill the void, this sounds like a band who, although they created incredible music with vocals, was always meant to be an instrumental outfit. Maybe fate has a funny way of working!

The next track ‘Tungsten Gold’ has a sound I find hard to explain. There is an underlying commercialism to the simplistic chord pattern that isn’t a million miles from the sound QOTSA had on their first album yet retaining Gonga’s Sabbath meets Hawkwind meets King Crimson vibe. After some of the more “out-there” moments on the record so far, this track sounds positively breezy in comparison and is the perfect shift in tone that keeps the listener on side and hooked as well as featuring some of Brother George’s finest lead playing.

For the most part this is a pretty upbeat and sonically dense, heavy album yet the trio on final track ‘Solar Maximum’ opt for a distinct change in pace and vibe. Still fuzzy, but more open, clearer and dare I say it delicate. The drop in velocity is accompanied by a more free flowing, vaguely psychedelic tone that gradually builds in intensity as the song progresses through peaks and troughs as well as featuring some of Brother Tom’s best drumming on the album, shifting from restrained and textural to outright Ginger Baker style craziness.

Fifteen years and three albums into their career, Gonga have finally honed their sound into something that is identifiably them, a sound they seem at home in and comfortable with. It’s possible that the instrumental tag and lengthy songs may put off some of the more ADHD, Ritalin fuelled folk out there but the reality is this is a remarkable and brave album from a band that has as much tenacity as they do talent…possibly one of the best albums of the year!