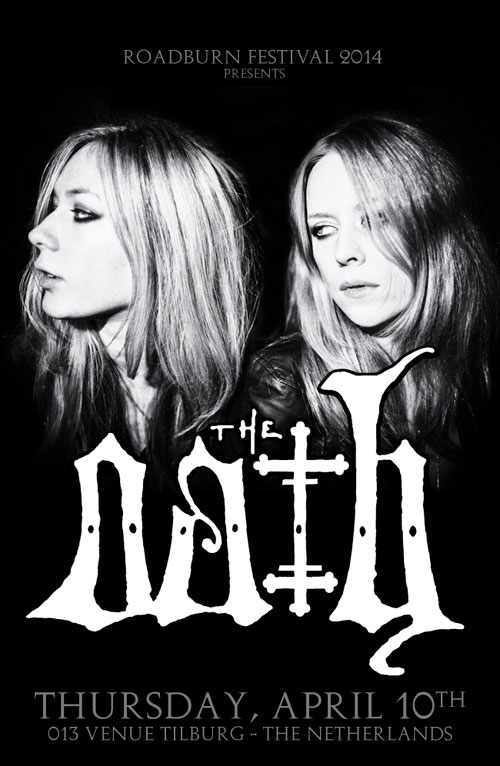 Hailing from Berlin, Germany, The Oath is one of the most talked about bands in the underground right now, and for good reason: their mind-blowing  debut 7″, Night Child / Black Rainbow, puts The Oath at the forefront of the current crop of 70s inspired hard rock bands and earned them the highly-coveted title of ‘Band of the Week’ by none other than Darkthrone‘s don of metal Fenriz.

Walter & Co at Roadburn HQ are captivated by guitarist Linnea Olsson (Sweden) and German singer Johanna Sadonis‘ perfect mix of 1970′s heavy rock and 1980′s New Wave of British Heavy Metal and felt the irresistible urge to invite The Oath to the 2014 Roadburn Festival solely based up on those two stunning tracks  – they simply had no choice as the band is that good!  Citing Danzig, Black Sabbath and The Runaways as some of their main influences, their lyrics, centered around death and the beyond, are just as raw and direct as their dark, dirty, exciting, but catchy take on soul stripping hard rock.

Olsson and Sadonis, completed by bassist Simon Bouteloup (Kadavar, ex-Aqua Nebula Oscillator) and British drummer Andrew Prestidge (Angel Witch, Winters), recently recorded their debut album, which will be released via Rise Above Records in March 2014, swiftly followed by The Oath‘s much anticipated Roadburn performance on Thursday, April 10th at the 013 venue in Tilburg, The Netherlands.

WEED IS WEED ‘Blunt Force Trauma’ Out Today; Streaming In Full At The Obelisk