When we think of Swedish metal and rock bands, the instant benchmark of quality is At The Gates, Opeth, Witchcraft, Cult Of Luna, Meshuggah, and Katatonia. There’s a vibe and sound uniquely recognisable with these acts, and even without the most geographic knowledge, when you think Swedish bands, you think of these. Yes, you could also be a massive douche, and say ABBA, but if you did, you need a little word with yourself, and maybe not be reading The Sleeping Shaman, as it’s a source for good music, and you have bitterly failed with your nonsense.

When you step toward the genre of post-rock, things quickly get far vaguer. If I said to name two post-rock bands, could you even do it without the help of google? Probably not.

Well, fear not, because I’m here to save you that absolute embarrassment, to enlighten you with both some names of a couple of incredible acts, and then step further, and welcome you to one of those bands. From my own experience, this year I was completely blown away getting to see the incredible pg.lost at Portals festival in London. True figureheads of the scene, if you don’t know them, you should.

Well, it’s not pg.lost I’m here to talk about, for today is the turn of the unfathomably good Feed Me To The Waves, who have a new opus out entitled Apart, and if you don’t know them, then now’s the time to jump on in, and hold on tight.

Feed Me to The Waves, or FMTTW as they will be known in this review hence forth, are picking up the baton from pg.lost, and are taking their turn to run with this post-rock responsibility, for all it’s worth. Thankfully, at no point is there a stumble, and by the conclusion of the album, its safe to say that baton has been in good hands. What FMTTW have produced is one of the most beautiful and thought-provoking albums that has been released in 2022. To give you somewhat of an idea of the sound, if you imagine Mono and pg.lost in a room together, sharing ideas, I think that’s a pretty safe comparison to draw. I hope so anyway, I know how elitist post-rock fans can be.

That’s not to say that this is a copy of either band, because it really isn’t, FMTTW is FMTTW, there’s no two ways about it, but to help in making a ‘would I like this?’ decision, think of those two bands, and you won’t be far off.

For the record, at this point, I would like to say that this is one of the best things I’ve heard this year, full stop. In a world where albums are being churned out like water from a tap, to find something that’s truly remarkable is unique. What FMTTW do, is throw out specific structures and concepts, and make music that is both lavish and sparse, warm and cold, and light and dark.

As is the case with a lot of post-rock, this album is, except for one, or maybe two moments, an instrumental album. Yes, in the past I have struggled with albums that have no vocals, but as my musical tastes have grown, so has my appreciation for lavish soundscapes, and moments of reflection through sonic highways. And this is what FMTTW do best. Their mastery of vision, coupled with a mastery of their instruments and musicianship, make for an experience unparalleled, in my humble opinion.

make some time to embrace Apart as this isn’t car music, this is headphones on and turn off the world around you music…

Yes, I could dissect this album track by track, and tell you all about it like a review I would usually do, but that would only serve to downplay the greatness of this work. I would rather say this… If you want something that will elevate your existence through music, then this is the album for you. If you want stadium rock anthems, then this isn’t. Also, if that’s your bag, stop reading reviews about post-rock!!

Across this eight-track album, which amasses a time of just under an hour, you are getting effectively two Rob Zombie albums length of music, with less over the top clichéd nonsense, and a far more grown up, powerful heart stopping music than you could shake a stick at.

It’s hard to review an album usually without actually tearing it apart, but with this album, it can be summarised in a few short words, and without all that fuss, by simply saying this, ‘you need this in your life’. It doesn’t need dissecting. The quality of the whole package is sickeningly good, the ideas and concepts are fully realised, and the way it leaves you inside, I believe, isn’t something you will quickly play down.

Like stated earlier, it is reminiscent of Mono at times, and after seeing Mono play live ealier this year, if I said the word captivating, I don’t use that lightly. Mono completely envelop the space around them, the air, the whole environment in fact, with sound, and it’s the same here with FMTTW. This isn’t just music; this is food for your soul.

This isn’t the review I wanted to write, but it’s the review I HAD to write. Don’t underestimate the power of FMTTW on your soul, because they need to come with a warning, it’s that simple. The warning should read ‘be ready, this will change your world’, and if you do take the time to search out FMTTW from this review, I hope it fills you like it’s filled me, with warmth, hope, love, and a sense of oneness with the world.

Please make some time to embrace Apart as this isn’t car music, this is headphones on and turn off the world around you music as the likes of this album really doesn’t come along that often. Embrace it, and love it, it will serve you well. 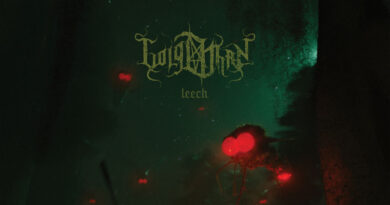