It’s always nice to hear from that band you used to love, especially when they’ve been lost in the wilderness for a few years, but that isn’t always possible. Sometimes, though, you’ll get the next-best thing, and this is the case with Farer. Featuring Frank de Boer and Sven Jurgens of Dutch sludge/post-metal titans Ortega, alongside bassist and vocalist Arjan van Dalen, they released an EP under the name Menhir five years ago before a name change and a slight shift in direction led to this.

Featuring four cuts of caustic, harsh and truly unforgiving blackened sludge that takes all of the nihilistic pain of The Body, Amenra’s thick, tarry groove and a percussive approach that borrows liberally from Neurosis’ primal minimalism and compresses it into an emotional black hole. Originally released on CD and cassette earlier this year, it’s now been given the vinyl treatment it deserves and was crying out for.

Key to Farer’s approach is that they have opted for a twin-bass, zero-guitar setup, focusing purely on the low-end and the distorted, gut-rumbling tremors that come from pushing that to its limit. It straddles the border between drone and noise rock, repetitive enough that it can almost draw you down into a stupor, while keeping a scuzzed-up, filthy undertone that sits proudly on the side of discomfort.

Opener Phanes uses this to great effect, letting Jurgens’ sticks fall haphazardly across the kit before picking up in urgency and violence, and the rhythmic rise and fall of de Boer and van Dalen’s basses leave the song reeling, a blackened ship tossed to and fro on hellish waters. It’s unsettling and when backed by the desperately howled vocals, full of pain yet curiously abstract, and desolate, mournful chants there’s a real power that’s apparent from the outset.

Asulon doesn’t vary from that same darkness but its route in getting there is vastly different, its drawn-out chords and cosmic pulsations of synth, giving it a more alien sense of desolation. The use of clean vocals is an interesting diversion too, allowing a glimpse into something approaching calm before the storm is whipped up again, howls and urgent, sludgy riffing building up to a fevered peak and plateauing for another five minutes. It does feel a little drawn out, giving how exciting Farer are when they choose to shift and evolve mid-song, but they still manage to throw enough detail into even the most minimalist of moments that no-one could accuse them of being complacent.

Though Moros might be the shortest offering (but hardly by much) it’s the one piece that truly pushes the band’s eclecticism to its limit. Strange, jilted rhythms cycle and stab at the senses through all that low-end murk, strange chattering’s circle like demented harpies and the whole thing reeks of epic, world-altering doom! It’s bewildering one moment, beautiful the next, and between the tortured chaos and depressive moments of stillness, it’s just a colossal piece of music. Jurgen in particular is on exceptional form, delivering a percussive finale that feels like Neurosis’ Cleanse in miniature.

Closer Elpis doesn’t so much try to summarise what has come before but rather it forces the listener to re-experience it. A torrential ebb and flow of tremolo, distortion, feedback and infernal howls, it doesn’t just evoke rage and loss but also a sense of melancholy, even resignation as it rises and falls with unwavering determination before fading off into wailing winds and, eventually, nothingness. There’s nothing ground-breaking, no cunning twists and turns, just a steady outpouring of negativity that takes no prisoners.

In all honesty, Farer could simply have re-tread old ground for this record, and it would have been adored, but Monad is a much riskier venture that pays off for its boldness. The band themselves describe it as ‘a testament to suffering’ and it’s honestly an uncannily apt description – it’s not pretty but there’s a brutal simplicity that works primarily because it cuts out so much of the fluff, leaving only pain and the echoes of riffs behind. 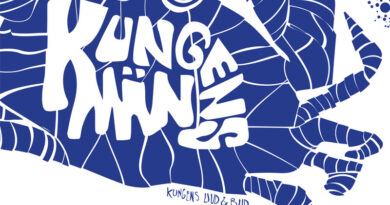