It’s hard to believe that we’ve had no gigs for almost a year thanks to COVID, however the upside is that artists have been prolific and nowhere is that more evident than with Mae Shults aka Everson Poe. In the past year Everson has released a staggering five albums (Grief being the latest), countless singles and compilations. According to the promo notes the album ‘owes its genesis to a Catafalque song which sampled The Exorcist III in which a serial killer is possessed by the same demon from the first film in the series’.

Everson is assisted this time round by db of The Sun Came Upon The Left/Revered And Reviled Above All Others, while the artwork by Ellie Lane fits in with the album’s religious concept; in which a Charles Bronson style vigilant Christian, dispatches those who engage in witchcraft, are possessed and have become apostates.

The album’s protagonist starts to question their own faith as to whether they‘ve been demonically driven to commit their crimes, leading to the painful realisation that they alone are responsible for their actions, that there is no god and they’ve subsequently condemned themselves to a life of suffering. The album features several samples including a preacher talking about demonic possession, an Alastair Crowley ceremony and interviews about serial killers Richard Speck and Ed Kemper. All of this foreshadows some pretty grim listening ahead.

Starting with Denial and a gently played guitar setting the scene for something ominous, and sure enough around the one minute ten mark, the music turns heavier with harsh death metal-esque vocals that remind one a little of Aaron Turner (Isis). Speaking of Isis, the music has a post-metal quality with the type of quiet/loud dynamic that fans of Oceanic may appreciate. For a brief moment the track adopts some pretty savage black metal before resuming its former post-metal flow. An interesting opener.

Anger is the shortest track on the album at a mere three minutes forty four, and for the majority features some beautifully melancholic post-rock that juxtaposes nicely with one of the albums many samples. This is interrupted eventually by an almighty slab of sludge metal that, sound-wise, isn’t too far removed from the much overlooked and underrated Harvey Milk.

Bargaining features some of the most disturbing vocals I’ve heard in a long time and is far more terrifying than the more traditional death grunts employed later during the warp speed black metal passages. If you get a big kick out of Rainer Landfermann’s demented vocals on Bethlehem’s Schatten Aus Der Alexanderwelt, then you’re guaranteed to adore what you hear on this number. The track eventually weaves itself into a tribal Neurosis styled vibe, closing in a comparatively mellow and meditative fashion.

At over fourteen minutes, Depression is the longest on the album and certainly the most progressive; it’s a track of enormous complexity with numerous time signatures and a multitude of genres from blissful post-metal, atmospheric shoegaze and fierce black metal all brilliantly interwoven. As the title would imply, Acceptance brings a sense of cathartic relief, the track eschewing the harsher vocal styling’s and heaviness, opting instead for something a little more epic and expansive ala space-rock/alt-rock legends Failure. This ends the album on a sombre and satisfying note.

Grief is certainly Everson Poe‘s heaviest album to date and will take a few listens to fully digest especially as there is a lot going on thematically and musically. However, stick with it and you’ll be amply rewarded for your perseverance. 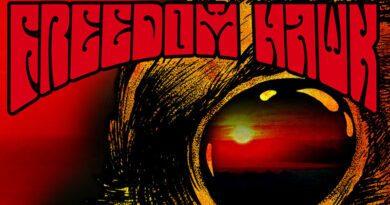 Review: Freedom Hawk ‘Take All You Can’