There are lots of good things to be said about the internet. Quite apart from being able to find no end of amusing cat-related homewares or Lego instruction manuals at the click of a mouse, it’s made us all very blasé about our access to music across the globe. If it was the 90s, listening to an album from a small record label in South Africa would have made you the proto-hipster to end all proto-hipsters, but now it seems entirely unremarkable. And yes, I’m impressed that I managed to avoid mentioning pornography as well.

Anyway, I’m going to go out on a limb and speculate that there must be an interesting heavy music scene going on in South Africa at the minute. Johannesburg’s Ruff Majik released The Devil’s Cattle late last year and it generated plenty of interest in our little corner of the interweb, including fellow scribe Will on his review. By remarkable coincidence, Evert Snyman not only produced that album, he also played a bunch of instruments on that record and contributed vocals too. Which brings us very neatly onto Hot Mess, his second solo album.

One of the things that stood out for me about Ruff Majik was their eclectic approach; The Devil’s Cattle was a smorgasbord of all sorts of out-of-control rock ’n’ roll craziness and riffy heaviness. Snyman’s solo record is similarly eclectic, but less overtly heavy and bit more reined in. In fact, there’s something about the whole record that screams QOTSA. Now, usually when I compare a band to QOTSA it’s my lazy way of saying that it’s from the more radio-friendly end of stoner rock without having to actually think of a valid comparison. Here I actually mean it: something about Evert’s off-kilter take on mainstream alt-rock means that almost every song would sit comfortably somewhere on Rated R.

Another thing to note about the album is that, as an annoyingly talented multi-instrumentalist, Snyman seems to have given some thought as to what instruments are needed on each track. Most bands have a drummer, bassists and a guitarist or two, so every song has drums, bass and some guitar on. Hot Mess is much more varied: there are plenty of tracks with a standard rock set-up and guitars set to maximum fuzz, but elsewhere there are some featuring drum machines, electronica, and even a piano.

Album opener The End Of Time is one of the heavier tracks, with oodles of guitar fuzz layered over a glam-flavoured bass riff. It’s a lot of fun and pretty much guaranteed to get your head nodding. Debilitate Me shows how Snyman isn’t content to just recycle the same ideas. It’s an interesting take on the quiet-loud format we all know and love, with a verse driven by some piano and chorus, with a guitar line that just screams Josh Homme. Dumb And Dead would be one of those shouty Nick Oliveri tracks and a good one at that, before things really slow down with Cleaner Than God.

Evert Snyman provides ample proof that he’s an excellent songwriter and a talented musician. Definitely worth a listen…

This is where Snyman’s adventurous approach to instrumentation really kicks in, particularly the percussion which is reminiscent of some clockwork mechanism. Elsewhere, there’s some bass guitar and the odd synthy flourish of a guitar played through too much squelchy fuzz. I wasn’t totally sold on this one the first few times I heard it, but it’s definitely grown on me and it’s a well-constructed track that builds nicely.

It feels weird reviewing an album with as many as twelve tracks – perhaps a sign that I should listen to more stuff outside of stoner rock and doom. In any event, the remainder of the album showcases a range of different but equally cool approaches, from the title track which utilises to drum machines and electronic sounds, to more charging fuzzy guitars on I Live The Lie, to the sinister bluesy murk of If Eyes Could Kill.

There are the odd moments which had me scratching my head. Parts of Maybe Never and Consummate venture into the borderlands of cheese territory and sound worryingly like Thirsty Merc (a long story – watch a few episodes of Bondi Rescue and get back to me), but ultimately improve as they progress.

The final track Burn is excellent: one of those songs that’s instantly and naggingly familiar, but I still can’t quite put my finger on precisely why. It works really well to close Hot Mess, but it would have sounded equally at home finishing Weezer’s Pinkerton.

I wasn’t sure what to expect from this album and I actually really enjoyed it. Hot Mess might not be crushingly heavy, but there’s still plenty of fuzzy, rawk action and Evert Snyman provides ample proof that he’s an excellent songwriter and a talented musician. Definitely worth a listen. 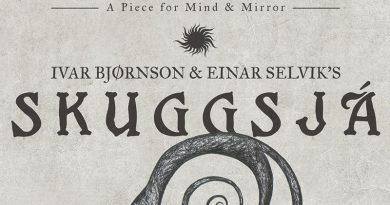 Crass ‘The Feeding Of The Five Thousand’ Reissue CD 2010