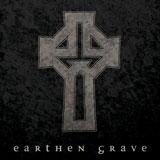 You’ll be unsurprised to read that a band featuring legendary Trouble bassist Ron Holzner in its ranks plays Doom Metal, but what what may surprise you is how they play it and what else they bring to the table.

Active since 2008, Chicago’s Earthen Grave weld the downcast air and dramatic, leaden guitars of the finest Doom to the more overtly metallic crunch of modern metal bands such as Hammers Of Damnation to give us a slightly more strident, pacey take on the traditional formula, further emboldening their sound with the wraithlike violin of classical player Rachel Barton Pine snaking around the gleaming riffs and thickening harmonies.

Whilst there is a definite Trouble-like sheen to the guitars of  Jason Muxlow and Tony Spillman – as opposed to the more usual Sabbathian/Pikeian murk – Earthen Grave share none of the Beatle-esque melodic leavening or multiple twin harmonies with Holzner’s former band.

No, their Doom is of a much more aggressive-yet-mournful stripe, made more so still by Barton Pine’s violin and the plaintive vocal of Mark Weiner – pitched firmly in the Maynard James Keenan vein, Weiner’s expressive, melodic and occasionally gritty voice soars above the grinding crunch, often meeting Barton Pine head-on tonally, and harmonising with Holzner’s backing vocals to great effect.

Opening with the tolling of a distant bell, ‘Earthen Grave’ lets rip with a gleaming, ominous, metallic riff before subsiding and easing the listener in more gently via Weiner’s unusually-pitched vocals, strummed guitar and liquid subtle bass from Holzner. As Barton Pine joins the fray, the ominous intro riff returns and things coalesce into a more forceful direction. The pace picks up in the final quarter, in which wah-wah guitars duel and harmonise with Barton Pine, building into carefully constructed layers under which Holzner’s supple bass ebbs and sways, anchored by the rock-solid drums of Scott Davidson.

After this first track, I was left with the distinct impression that these Earthen Grave cats know exactly what they’re doing and what they want – the crystal clear production is buffed to a mirror sheen, allowing us to hear exactly what those gleaming guitars are doing at all times, but also allowing for Holzner to cut through when needed and to highlight that Barton Pine’s violin functions as an integral part of the band as a whole, not just as a novelty – the virtuoso solo in ‘Beneath A Shovel Load‘ in particular impresses greatly.

Her slightly distorted electric playing on the intro to last track ‘Death On The High Seas’ adds a very unusual and distinctive texture to Earthen Grave’s pallet, and it’ll be interesting to hear if they decide to push the violin into different areas in future material.

As for the rest of the album, ‘Blood Drunk’ has a touch of Metallica’s ‘Fade To Black‘ to its semi-balladic structure and galloping chorus – surely no bad thing at all – ‘Dismal Times’ and the afore-mentioned closer ‘Death On The High Seas’ also have a touch of the Hetfield and co to ’em – Black Album era crunch, chug and lurch ala ‘Sad But True’ and the immortal lurching chug of ‘Harvester Of Sorrow’ specifically – ‘Tilted World’ has a particularly strong vocal line and chorus, almost sounding like a more ‘commercial’ Saint Vitus to these ears.

A pair of covers are also present, namely versions of Witchfinder General’s ‘Burning A Sinner’ and Pentagram’s ‘Relentless’, both of which are belted out with great reverence and aplomb, with Weiner pitching his distinctive vocals up a notch on the former in order to get closer to Zeeb Parkes original sound and delivering a blistering performance on the latter that, to these ears, eclipses Liebling’s original vocal effortlessly.

So there you have it, ladies and germs, the debut self-titled album of Earthen Grave, and what a debut it is – self-assured, nuanced, perfectly produced and put together without so much as a beard hair out of place. Of course, we’d expect no less from Ron Holzner. Whilst his former bandmates have spent the last few years running in circles and imploding on a semi-regular basis, Ron has been  grafting and crafting away with his bandmates to bring us this highly polished and exquisitely-cut gem of an album. Time well spent, I’d say.