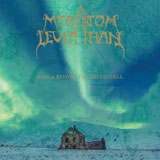 The first and last time I heard Megaton Leviathan was soon after the release of their first self-titled demo in 2009 as a result of the now sadly deceased Cosmic Hearse blog. I downloaded it, listened to it a few times, then stopped. I enjoyed what I heard: a lo-fi approach to a type of epic doom metal showing clear influences from indie rock and shoegaze. It didn’t stick with me, however, and was relegated to a dusty static corner on my music hard drive. Five years later and the slightly ridiculous but distinctly memorable name Megaton Leviathan pops up on The Sleeping Shaman’s reviews list. Unaware they were still going, I was curious to see how the band and music had changed.

Past 21: Beyond the Arctic Cell is an album filled with droning, psychedelic effects infused into soaring, downtempo riffs and hulking drums that characterises a lot of mid-90s doom efforts that came in the wake of The Gathering’s Mandylion. It’s not quite doom, not quite post-rock, and not quite avant garde metal. This almost perfectly sums up the 12 and a half minute third song Arctic Cell, where a near constant low-level barrage of warbling keys underpins a megalith of melodic lead guitar breaks and bass-heavy drumming. Both male and female vocals take on a drawn out yearning approach in which you can probably make out words, if you pay enough attention, but functions primarily as another level of instrumentation. Yet there are also unexpected elements such as the sitar found throughout The Foolish Man or the emanating string section during the latter part of opener Past 21.

Perhaps the biggest problem with the album is, I feel, the lack of anything obviously engaging. As the album drifts casually along its lead guitars, cresting and dipping from riff to riff, there is an atmosphere of lethargy that is reflected on the listening experience. At no point did any riff or vocal or drum part stand out. Perhaps this is the result of a slow pace that changes little between riffs or songs; perhaps it is the simply a lack of interesting riffs; perhaps it is meant to be listened to live rather than on record. Like looking at a beautiful painting on the internet, the music here is clearly a work of passion and yet that passion isn’t communicated via the medium. Where the self-titled demo from 2009 was punchy with its use of heavily distorted guitars and more straight-forward composition, it seems the ambition of Megaton Leviathan this time has become lost somewhere in translation.

I am willing to accept that this is a grower, however. Certainly I have found the album more enjoyable after the 10th or 11th time through than upon first listening. Yet had I not been writing a review of this album it seems unlikely I would have returned to the album this many times already. Whilst there’s no doubt that this mix of doom, rock, and light psychedelia will appeal to some people, I can’t help but feel that it lacks enough points of engagement to draw in all but the most obsessed. Check out the self-titled demo, available on their bandcamp, for a different but more interesting version of this band’s sound.