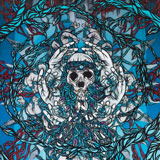 If you weren’t at DesertFest 2013, you missed out on a lot of things. You missed out on Camden’s Black Heart smashing their record for bar takings in a single weekend to sweet smithereens. You missed a volume of beards so vast that London’s collective plugholes are still having blockage-based nightmares. You missed John Garcia getting out of a car next to The World’s End pub and declaring “It sure is a little strange having a desert fest in the middle of London…” But most of all, you missed out on three straight days of nodding your head to the point of permanent injury whilst enjoying the euphoric atmospheres, guffawing laughter and some truly incredible live band performances. The good folks at festival organisers Desertscene may not have been successful in bottling up the sweat, those tasty on-site kimchi burgers or the mountains of beautiful merch housed inside the Underworld, but they have been able to capture some of the unforgettable music blasted around Camden on that wonderful weekend back in April. What’s more it’s been pressed onto a tremendously sexy slab of glistening sky blue vinyl and decorated with some deep and mysterious skull-based artwork by spectacular artist Shcoph for good measure.

Side A brings us the aforementioned Mr Garcia alongside his Unida colleagues smashing their way through some timeless classic stonerisms in the form of ‘Stray’. Mike Cancino’s giant drum-sound fills the Electric Ballroom almost to capacity by itself and through the ridiculously beardy Arthur Seay, Unida proudly showcase the heavy riffing and bluesy soloing that won them so many fans after the demise of pioneers Kyuss in the mid-nineties. No sooner have I used the word “classic” than Fatson Jetson appear as if from nowhere with ‘Flames For All’ from their faultless Friday night headlining slot at the Underworld. The Lalli family band showcase unstoppable passion, drive and guile and those stuttering vocal lines that can only belong to mainman Mario as Tony Tornay delivers an absolute masterclass in drumming perfection behind the kit. One of their more rifftacular moments, ‘Flames For All’ is followed up with practically hat-throwing applause upon its sudden conclusion.

It’s time for something a little more out-there as Yawning Man crawl across the vinyl’s grooves with ‘Dark Meet’; a desolate, and at times morbid, instrumental ride across the outback with only coyotes and sand dunes for company. Gary Arce’s spellbinding guitar work is complemented beautifully by Mario Lalli, this time on the bass guitar, as these legendary practitioners spin a pastiche of unparalleled cosmic bliss. Next up are the bouncing zebedees of modern day stoner rock themselves Truckfighters, blazing a trail down the desert highways atop the ‘Chameleon’; one of their slightly less raucous cuts from 2007’s ‘Phi’ record. Still, the almighty crunch of Ozo’s bass and Dango’s perfectly-fuzzed guitar are as hard to ignore as ever as the Swedish power trio gradually work their way through the gears and blast off into the cosmosphere. American? No. Third-wave desert rock royalty? Definitely.

Flipping the strikingly blue wax to Side B gives us two of the 2013 line-up’s greatest coups; the fascinating and exclusive return of two of Sweden’s long-lost stoner greats – Lowrider and Dozer. The former-mentioned denim-clad mob leads off from the outer perimeter with ‘Flat Earth’; a starkly upbeat cut from their long out-of-print ‘Ode To Lo’ record. This is arguably the fuzziest riff-rock music in the universe, yet as the interlocked solos ebb and flow, the band takes on an almost-underwater tone, all bubbling basslines and sugar-sweet vocals before that gigantic riff kicks back in.

I ain’t gunna lie, Dozer were even more jaw-droppingly invincible that evening and as ‘Rising’ thunders around your skull with those rock solid tom beats and sing-a-long pre-chorus of “I can’t wait to see you fall!” it’s as clear now as it was then just how vital this band was to the second wave of stoner rock. “Euphoric” as a term doesn’t even get close to describing this moment caught in time as that ridiculously spacey solo cackles through the amps. Seay and Cancino then return with House Of Broken Promises on the straight-up, gritty highway rock of, umm, ‘Hi-Way Grit’, a balls-to-the-wall riff-o-matic filled with gasoline, weed and live-fast-die-hard good times. Frontman Jo Mora’s gleeful “I don’t know about you, but I still like to smoke pot and listen to Kyuss!” victory rally pretty much sums up the entire occasion and reminds us that it’s not just the fans who are glad that this scene is still alive and well, but the bands themselves too.

With half a side of the 12” left and only one song to go, it can only be Colour Haze to close out this weekend of happy memories and guitar-flooded abandon. Stefan Koglek’s scintillating mixture of strident, forceful riffs, improvised soloing, finger-tapping percussive notes and heart-tickling vocals are at the forefront of the Germans’ gigantic sound on the vast expanse of ‘Tempel’. This mighty song from the conclusion of their set remains a highlight of not just this record or DesertFest 2013, but the desert scene’s ever enduring power and imagination.

Both by acting as a great souvenir to those in attendance in Camden last April whilst remaining equally a superb live desert rock compilation in its own right, ‘Live In London’ showcases the past, present and future of the stoner genres. Perhaps it lacks a little of the festival’s heavier spectrum (Bongripper, Conan, Toner Low, Belzebong and Pentagram are all notable absentees) but still, if you can’t smell the roadkill toasting itself on the asphalt or smell the grains of sand riding the humidity-banished breeze, then you’re just not listening hard enough. With a stellar line-up already confirmed for 2014’s edition, the future of the desert is all too strongly secured here in London.