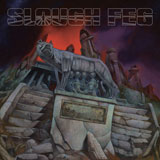 I am, however, always an admirer of bloody-minded rampant individualism, Prog Rock and twin-guitar harmonies and Slough Feg – formerly The Lord Weird Slough Feg – manage to weld all of these things to classic ‘eavy metal with enough verve, aplomb, moxie and chutzpah to thoroughly meet my approval…although I can’t speak for the loincloths.

The San-Franciscan quartet – originally based in Pennsylvania – have been ploughing their highly individual furrow in one form or another since 1990 with vocalist/guitarist and philosophy professor Mike Scalzi the one fixed constant and mastermind behind the whole shebang. Joined by guitarist Angelo Tringali since 2005, bassist Adrian Maestas since 2001 and nimble drummer Harry Cantwell since 2007, Scalzi has steered the band across eight wonderful but woefully underappreciated albums for a variety of different underground labels until finally being picked up by the legendary Metal Blade last year.

Following 2010’s well-regarded The Animal Spirits for Profound Lore, Digital Resistance is the first all-new recording to be released by the band through Metal Blade, following a box-set reissue of three of their fan-favourite albums last year that finally made modern classics of metal Twilight Of The Idols, Down Among The Deadmen and fan-favourite Traveller available to the masses, and it’s a consummate collection that plays to the band’s strengths and packs quite the heady punch.

The Slough Feg sound is a delightfully quirky melting pot of Trad Metal, Prog Rock and Celtic Folk with a Thin Lizzy feel, along with a certain je ne sais quoi that all goes together to make something that can only really be described as ‘Slough Feg‘. The only other bands that spring to mind when listening to ’em are the slightly-more-trad Manilla Road and the slightly-more-theatrical Hammers Of Misfortune – which is unsurprising when you find out that Scalzi and Hammers mainman John Cobbett spent five years together in pre-Hammers band Unholy Cadaver, and that both men had also been members of each man’s respective bands during the early 2000s too.

‘Analogue Avengers/Bertrand Russell’s Sex Den’ opens and sets out the Slough Feg stall for all that follows, an addictive blend of nimble, tumbling drums, see-sawing celtic-influenced rhythms and needling guitars, shot through with whirring organ and topped with Scalzi’s strident, imploring vocal. Tempos ebb and surge, shifting from percussion-driven busyness to more open, elegiac passages that really help to highlight the melancholic quality of Scalzi’s voice.

For most of the rest of the album, the organ remains unused, with title track ‘Digital Resistance‘ dripping with Lizzy/Maidenesque harmonies, dense, unusual chords and Cantwell’s relentlessly nimble rolls, and ‘Habeas Corpsus’ bringing out the acoustic guitar, strumming astringently away beneath washes of electric guitar and pounding toms as Scalzi spins the tale of a reflective mob hitman. The acoustic stays on board for the immensely proggy ‘Magic Hooligan’, adding an additional textural layer beneath the complex mayhem, but is ditched for the dissonance and harmonies of the macabre-sounding ‘Ghastly Appendage’ – probably my personal favourite track on the album – and the galloping, needling metal of former 7” ‘Laser Enforcer’.

Cantwell eases off for the crunching ‘The Price Is Nice’, giving Scalzi’s rhythm guitar and Tringali’s lead lines plenty of room to breathe. The mostly instrumental ‘Curriculum Vitae’ follows, tailed by the return of the acoustic guitar for ‘The Luddite’ and as a part of the mix on epic Prog Metal closer ‘Warriors Dusk’.

In a way Digital Resistance functions as concentrated Slough Feg – for the uninitiated it serves as an excellent way in to the world of this one-off band of metallic misfits, and for longtime fans it simply serves up more of what we love.

With the added push that a label like Metal Blade can provide, perhaps Slough Feg will finally be able to break out of the weirdo metal ghetto that they’ve long been consigned to, after all playing to a wider spread of people in a wider range of places could do wonders for the band’s fanbase.

If Slough Feg have until now been simply a name that you’ve been meaning to check out, Digital Resistance could well be the release to tip your hand, and if not, well, it bloody well should be!