Rising from the depths of North Carolina, coming at you with an absolutely incredible debut, are Crystal Spiders, and they’re more than your average rock duo. Molt is full to the brim with storming drums, and bass driven chunks of pure stoner goodness, which provide the perfect background for Brenna Leath’s hypnotic, and at times haunting vocals.

Beware, there’s a beast on the loose, and it is coming your way.

Crystal Spiders are the brain child of Brenna Leath, who provides bass duties and vocals, and Tradd Yancey, who is an absolute animal on the drums.

Tradd may be recognisable to some from previous bands including Transistor Zen, while Brenna plays in the band Lightning Born alongside Mike Dean of Corrosion Of Conformity no less. Mike also assisted on production of Molt, using analog production techniques, to give this album a feel and a sound that is stooped in a durgy darkness befitting a sound such as this. If anyone knows how to capture those bassy rumblings at its best, it’s Mike Dean, a virtuoso in his field.

After releasing an EP in 2019, to wide acclaim, Crystal Spiders have returned to the studio to etch their iconic sound to vinyl for all time, on this nine-track behemoth of an album.

When you think of the most iconic duo’s who play loud and heavy music, it’s usually the combination of guitar and drums that are the standard. Both The White Stripes, and Blood Red Shoes follow this path, but it’s less common to find a bass guitar and drum arrangement. Royal Blood have chosen this path, and it works well for them, its altogether a darker listening experience sound wise, but where Royal Blood seem to have fallen into a more mainstream chart demographic, Crystal Spiders are taking things off in a completely different direction, and it’s a must listen for stoner fans, looking for something new, and altogether refreshing in the whole genre.

Right from the start, and opener Trapped, even as the bars roll in, I already know this is a bit of me. The droning bass and hypnotising vocals enchant me, and as I close my eyes to take it all in, I’m taken away to thoughts of hot summer nights and a good smoke. I’m reminded of Jess And The Ancient Ones, and Kyuss, but also toward Weedeater, the drum and bass are so thunderous, it’s hard not to become swept away in the infectious sound.

Throughout the album it strikes me at the resemblance to Blues Pills, especially on the upbeat tunes, but it’s less retro in sound, and is far drudgier. The spellbinding vocals are matched perfectly with the dark, grungy backdrop. Tracks like Molt show a leaning toward a more punk rock styling, and this gives the recording a single take, DIY feel. It’s less produced, and more visceral.

the drum and bass are so thunderous, it’s hard not to become swept away in the infectious sound…

Tigerlilly absolutely floors me, it’s a slow-paced stomp, but the drumming is absolutely mesmerising. It’s so vibrant and infectious, I find myself completely dismissing everything except the drums. The enthusiasm is hypnotic, it takes me over, and I can’t help but feel moved by it, or it’s the feeling of moving to it, but either way, it’s all good.

Lead single C.U.N. Hell (read as ‘see you in hell’), encapsulates Crystal Spiders at their most dynamic, and it’s no surprise that this has been unleashed to showcase the band, it’s a real cracker of a tune. It’s an upbeat, fast paced ride, and has all the hallmarks of that iconic stoner rock demographic. It even drops in to a Sabbathesque drum pattern, which is strangely reminiscent of War Pigs.

This thrill ride of an album runs through in swathes of highs and lows, before dropping into a completely unexpected realm on the track Headhunters. It is suddenly a far more hypnotic affair, and it’s a real trippy interlude, before the last track on the album, Fog, takes over and finishes the album in a completely different way to where you would believe it’s going.

It’s a real slow burn of a song, crawling into life, and feels like something from a film noir soundtrack. As the listener, you’re expecting it to take off, and return to the intensity of the rest of the album, but it never does. ‘Follow me in to the fog’ Brenna repeats over and over, and that’s exactly what it feels like. It’s like being lured into the darkness, being a willing victim, and following into the black abyss, and the dead of the night.

The thing I came to realise with this album, after repeated listens, it’s consistently good, from start to finish. There are no duff tunes, nothing is out of place, and there are times where so much is going on, it’s hard to believe it’s a duo.

I have already marked the 25th of September on my calendar, its album release day, and with a bit of luck there’ll be a knock at the door and the postman hands me the vinyl that I preordered straight off the back of listening to this. It will be a very good day for me indeed and for you too, if you choose wisely, and invest in a copy. Remember the name Crystal Spiders, they’re going to be leaving a mark, that’s for sure. 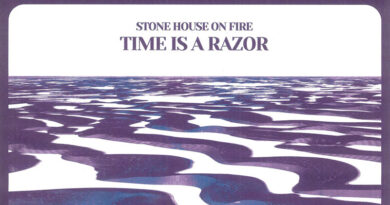 Review: Stone House On Fire ‘Time Is A Razor’