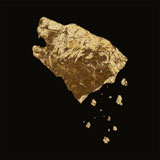 As far as music goes, Crippled Black Phoenix are hard to really put in a box. Their sound really is something special, embracing different aspects in a mixture that is dreamy and heavy at the same time. Bronze is their sixth full length effort and it is a remarkable spectacle indeed.

Having members, past and present, in their ranks from bands like Iron Monkey, Gonga, Mogwai, Electric Wizard and many more, you can see where all the ingredients come from. Carefully measured and added in modesty, this creates a fine buffet of music. It’s like cooking a really great meal, but when you try it yourself, it’s like you’ve just chucked all ingredients together and it looks like it’s been through someone already. No, in that sense Crippled Black Phoenix are Michelin star chefs. Well, in the bio the band uses the creation of bronze as a metaphor so that works too.

Listening to this record is an immersion, a musical journey that you can only find with the best, most accessible proggy records out there. Accessible is not a dirty word, when you manage to create complex beauty that people actually can follow. The gentle build-up of the soaring Dead Imperial Bastards is a good example, it allows you to enter the world that is Bronze. There’s extensive use of samples on this album, to break up the songs a bit. It helps with the story telling of the album, which really is what music like this feels like. But it’s the contrast between those dreamy waves and then suddenly the ripping riffs really grab you. That perfectly walked balance, like on Deviant Burials.

It’s the wistful vocals of Daniel Änghede that do the telling part. His exalted vocals serve as a guide, beckoning the listener. There’s something unctuous to the warm tones he offers, soothing and calm. Though a bit more forte is applied when needed, like on Rotten Memories. Here the guitars soar in accordance with the synths and keys, offering a melancholic experience where the listener can keep discovering other aspects the instruments add. The song is a mere intro for the bombastic force that is to come with Champions Of Disturbance (Pt 1 & 2). A grand show of all instruments with a galloping rhythm that makes you nod your head or tap your feet. Tight waves of guitar and bass, while solo play takes over from the vocals that really brings it all to the summit in this track. Not just the track, the whole album finds its climax here, which is really head and shoulders above the rest.

The strength of Crippled Black Phoenix is an arsenal of guests and additional musicians. Surrounding Justin Greaves, Mark Furnevall and Daniel Änghede are another nine people. The vocal support from Belinda Kordic (who has sung on pretty much every other album too) offers a break on Scared And Alone. The angelic whisper translates well with the keys and tragic build-up of the song, gathering strength and vitality again for more.

It wouldn’t do to write a review about a Crippled Black Phoenix album, without mentioning, Pink Floyd. Yes, that remains the best comparison even though there’s a little dark edge to it, driving in the post-rock/post-metal direction. On Winning A Losing Battle they demonstrate how closely, though they do have a bit more meat on their bones so to speak. By the time you arrive at this point, it’s been a ride through the flatlands for a bit and I wouldn’t be surprised if some people might have parked the album by then. All in all a great record, but around the middle of the meal we sort of have the best flavors, after which you’re just stuffing yourself from the bread basket.