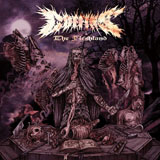 Spewing out a slow motion Autopsy since 1996, Coffins have gained a reputable name through a couple of thousand splits and a good knowledge of what is tasteful and what isn’t. Seen as a novelty by some because they’re from Japan (which couldn’t be more wrong with Japan producing great punk, rock and metal for decades) Coffins have now reached album number four and their first for extreme metal heavyweights Relapse Records.

Melding the raw, uncompromising make up of death with the filthy grooves of doom is what the band are known for and ‘The Fleshland’ is a great example of the two working together. Opener ‘Here Comes Perdition’ starts like a slower Asphyx song before moving into a faster and more violent middle section complete with a welcoming guitar solo.

Guitarist Uchino clearly has a varied taste and posses the rare talent of successfully flicking between tempos and styles with punk, sludge and old school death metal clearly on his weekly rotation. ‘Hellbringer’ is where his tastes seem to come together, with a surprising amount of musical ground covered for a band that are often labelled as one dimensional.

It is when Uchino and co. touch on their full throttle, ferocious death side that they are at their most deadly. ‘Rotten Disciples’ is easily the album’s strongest song with an unholy take on all the best bits of death metal which doesn’t relent and even contains the extreme metal ‘eurgh’ to tick all the boxes for fans of the old school.

On the other side of the spectrum, Coffin’s tracks which stay at the slower tempo are their only real letdown, becoming a bit tedious at times. ‘The Colossal Hole’ is the main offender on ‘The Fleshland,’ never really taking off in the same way as their faster stuff and as a whole missing that necessary ingredient that gives Coffins their staying power.

Rounding off this LP nicely is a rotten production that completes the band’s ‘if it ain’t broke..’ ethos. Having the same level of murkiness as the classic 80s bands, Coffins gritty and to the point production remains old school through and through whilst still having enough life for each instrument to breathe.

With ‘The Fleshland,’ Coffins have brought a breath of pungent air into death metal’s underground. Everything from the unnerving artwork to the precise and thought out riffs show a band that aren’t complacent in their work and are looking to carry on the traditions of their idols in the most virulent manner possible.