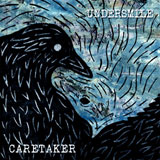 Split releases can be odd little things. Sometimes they highlight musically sympathetic like minded souls and at other times they showcase musically disparate acts in an attempt to cross pollinate genres and gain a wider audience for all. This split release featuring two tracks apiece from Winchester’s Caretaker and Oxford’s Undersmile kind of has a foot in both camps. While both bands are sonically miles apart there is an underlying sense of experimentalism that drives both bands giving the release a certain level of unity.

Kicking off with, “Yeehah!”, Caretaker display some interesting post hardcore/math rock tendencies. This instrumental track appears to show the band at the heavier end of their spectrum with some mean and muscular riffs riding atop a fractured drum rhythm alternating with some skittering guitar figures. The energy is there and the sound is great, however the song doesn’t really go anywhere. That said at a touch over three and a half minutes it certainly doesn’t outstay its welcome and the attitude with which it is played does hold the attention.

Things do come a little unstuck after the promising opening track on “The Inexorable March”. Opting for an overall gentler approach and featuring guest vocals from Michael Woodman of Thumpermonkey Lives, this track lacks the drive and immediacy of its predecessor. Rather at nearly 7 minutes there is a lack of cohesion in the song writing that sees it drift from idea to idea with no real hook and little focus. Vocally it sounds ok but not particularly distinctive and Woodman seems to struggle to pick any defining moments in the music on which to hang a melody despite the song building in intensity to its heavier yet not particularly cataclysmic or exciting denouement.

After Caretaker have warmed the crowd up to polite applause we arrive at the main event. Undersmile came, seemingly from nowhere with their “A Sea Of Dead Snakes” EP that showed that here is a band able to breathe some originality and life into a largely saturated and tired doom scene. “Big Wow” picks up right where the EP finished off delivering their now trademark crawling rhythms, measured in beats per hour as opposed to minutes, monolithic wall of granite guitar barrage and the haunting, dead eyed dual drone vocals of Taz Corona-Brown and Hel Sterne. Whereas most doom bands are happy to rely on worn out Sabbath cast off riffs hung on a loose fitting occult framework nowadays, Undersmile deliver their sound with a scary intensity, integrity and authenticity. It’s a sound that threatens to push you into the corner of a darkened room and taunt you until you’re a gibbering mess of tears and snot!!! This is psychologically terrifying stuff as opposed to physically threatening and for that reason epitomises the true nature of doom rock.

Listening to Undersmile is something of an endurance test as songs rarely fall short of the ten minute mark and both tracks here breach twelve minutes…it’s advisable to go for a pee before you embark on listening to this as there’s no room to go mid song…plus you won’t want to go to the bathroom on your own anyway after listening to this.

After dragging your soul to Hell and back on “Big Wow”, the band really up their game on “Anchor”. Here Undersmile expand their sonic palette as the song builds on a meaty, punchy riff but isn’t afraid to head into more delicate, though no less haunting territory. The shits in key and texture throughout the song show the way forward for Undersmile and the icing on the cake comes in the form of Sterne and Corona-Brown’s vocals. Branching out from the atonal drone they usually employ, the song sees greater emphasis on harmony and melody than we have seen from Undersmile previously and hints that there is a lot more up their collective sleeves to come in future. So far they have only scratched at the surface of the huge potential they have as a vocal pairing and now we have a clue as to what they may be capable of. In an over saturated scene filled with mediocrity, Undersmile offer a blackened ray of hope and could stand to be the brightest stars in the doom firmament.

Very much a release of two halves, Caretaker are a decent warm up act but it is undoubtedly Undersmile that are the stars of the show here and take the curtain call deservedly.