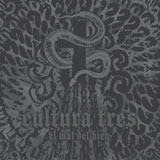 First of all, Cultura Tres deserve to be huge. Although I have to admit that they weren’t really on my radar before a copy of ‘El Mal Del Bien’ landed in my hands, now they stand out as one of the most promising new bands in the sludge and doom genres. They’re not even that new; this is their second album (following their 2008 debut La Cura) and they have already toured around the world, been heralded as a “Global Metal Discovery” by Metal Hammer magazine and earned sponsorship from Tama and Ibanez. Not bad for a strictly D.I.Y. band; all artwork, songwriting, promotion, managing, production and touring is handled by the band members themselves. Now they have unleashed their most direct and coherent artistic statement yet – ‘El Mal Del Bien’.

Whereas La Cura had its foot more firmly in the nu- and progressive metal genres, ‘El Mal Del Bien’ is an altogether heavier, slower, sludgier affair. Case in point is opening song “Propiedad De Dios” which is one of the best sludge/doom songs we’ve heard in some time, thanks largely to the band’s ability to throw in enough twists and turns to keep us guessing how the riffs will attack us next. Add to that the twisted, eerie Alice in Chains-like vocal melodies and the album is off to a great start. Likewise “Purified” works around a huge chaotic riff, building it up and then breaking it down, demonstrating the band’s understanding of song dynamics, a knowledge that the band puts to good use throughout the album. “Purified” combines elements of various bands – the anger of Sepultura, the subtle, accessible song-writing of Soundgarden and the driving groove of Queens of the Stone Age – but Cultura Tres manage to create their own unique sound from this heady concoction.

Elsewhere they take heed of their diverse set of influences which often takes their music into unexpected places. “Los Muertos De Mi Color” is an atmospheric instrumental number full of aching, distant guitar squeals that sound like whales bellowing while Latin rhythms pulsate in the foreground; one can imagine it fitting neatly into a Mars Volta song-suite. “El Sur De La Fe” and “No Es Mi Verdad” are full of wily lead guitars and sickening, discordant harmonies that create woozy, hallucinatory soundscapes that alternately erupt into violent outbursts and crumble to a low rumble.

In fact, the songs are so full of ideas that they could sound messy in less skilled hands but Cultura Tres manage to weave their ideas together, allowing one section to work off the next, each finding their own groove and momentum thus creating a cohesion that would confound many other bands. They also avoid playing straight sludge or doom, preferring to mix things up from time to time. For example, “The Grace” is the song that most resembles the band’s first album – it’s thrashy, punky and full of unadulterated fury. Title track “El Mal Del Bien” and following song “Voices” bleed into one another and combine the band’s new and old sound, like the Deftones end of the nu-metal spectrum colliding with Pantera. Many of the songs also feature guitar solos that would do Carlos Santana and Jimmy Page proud. Like the Mars Volta, Cultura Tres are capable of manipulating your expectations – a huge momentous riff will suddenly vanish to a whisper, a slow section will erupt into a flurry of changing time signatures and off-kilter guitar leads, a song will suddenly switch gear and sound like a classic Led Zeppelin wig-out.

You may have also noticed that there have been few references to other sludge or doom bands in the review thus far. That’s because Cultura Tres make their own racket by honing in on certain elements of their favourite bands, none of whom happen to be sludge or doom bands. Instead they fit into the genre through the moods they create and the bleak, sometimes angry lyrical content that permeates their songs. Sure, there are moments that recall Pantera, Down, QOTSA, the Mars Volta and Sepultura but you couldn’t say that Cultura Tres are merely imitating those bands; it’s more like they build upon their foundations. One of the most striking and refreshing things about the band is their understanding of good song writing. They never allow the riff to become a song as some sludge and doom bands can be prone to do, but instead strategically use riffs to carry their songs and their message along. If there was a criticism to be lumped at ‘El Mal Del Bien’ it would probably be that to a certain extent some of the songs are similar and can blur into one another but that is to be expected from a concept album immersed in the themes of anger, evil, corruption and spiritual betrayal. The band has stated that they conceived of the album with a clear goal and it shows in how well the album flows.

As if the album itself wasn’t enough, we also get two bonus tracks. First up is “Holy Graveyard,” a cover of singer Alejandro’s former band Epitafio from the early 1990s whom the press pack suggests may have been among the earliest South American exponents of doom. The song features vocals from Epitafio’s singer Rodnie Perret-Gentil and is more trashy than anything else on ‘El Mal Del Bien’. Cultura Tres then decide to end the album on one hell of a ballsy note: by covering Black Sabbath’s “Black Sabbath.”

…And it’s not bad at all. Although it doesn’t deviate too far from the original it actually ends up sounding like it could have been one of Cultura Tres’ own songs which is high praise indeed for a cover version. It’s a poetic end to the album as it serves as a tribute to the undisputed masters of doom from a band who must surely be one of the genre’s new shining lights. At the start of the review I mentioned that Cultura Tres deserve to be huge – with this album under their belts it will only be a matter of time before Cultura Tres are huge.

Check out the video for the track ‘Propiedad De Dios’ taken from ‘El Mal Del Bien’ below. 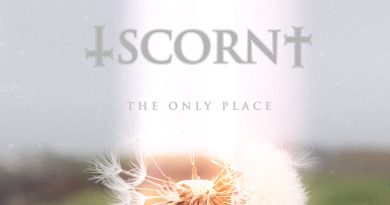