The Washington D.C. area has a long and storied history with cutting edge music. From go-go to hardcore punk and post punk, as well as metal, and of course, stoner/doom. The US capitol city and surrounding areas have long been fertile ground for talented musicians for decades. Hardcore punk, one could argue, was birthed in D.C. with the immortal Bad Brains, as well as Minor Threat following right behind them. The D.C. area also has a well-deserved reputation for producing all sorts of heavy rock & roll as well. The Obsessed, easily identifiable as one of the original doom metal bands, toiled in the same venues and scene as the D.C. hardcore bands, finding a kinship with them, despite being on different planets musically. Scott ‘Wino’ Weinrich‘s whole ‘Fuck you, we’ll play what we want, and dress how we want’ attitude fit right in with DC’s anti-establishment.

The Obsessed’s influence on the area was vast, as Clutch is from nearby Germantown, Maryland and Alabama Thunderpussy was from Richmond, Virginia. Borracho have also been on this list of D.C. area stoner/doom bands since throwing the gauntlet down with their Splitting Sky debut in 2011. They’ve since established themselves over the course of three full-lengths, and a myriad of singles, as their own identifiable entity in this genre, playing in well-established boundaries for stoner/doom but adding their own twists, making their sound easily their own. The chemistry between the power trio of guitarist/vocalist Steve Fisher, bassist Tim Martin, and drummer Mario Trubiano is obvious, as they are locked in from the second the opening notes of Holy Roller are introduced with a drum roll.

The fuzz that Borracho are known for is on display instantly. Fisher lays down some nice opening riffs, drenched in the aforementioned fuzz, as Trubiano and Martin hold down the groove. Fisher’s lyrics don’t need much deciphering as he delivers ‘On your knees praying, at the altar of clown’ and ‘salvation is on sale at the church of the absurd’ and the accompanying video leaves no doubt what Fisher is conveying lyrically.

Lead single It Came From The Sky follows, with an absolute monster riff and groove, as the band instantly locks in. Borracho’s sound and tone is massive, and it’s on vivid display here. Lyrically, Fisher is staying in the socially conscious zone with lines like ‘TV says it’s a government conspiracy, whatever happened to the land of the free?’ as well as barking ‘Fear! Control!’. It cannot be overstated just how massive the riffs and grooves on this track are, to say nothing of the leads Fisher fires off as the song nears its climax and ending.

Trubiano and Martin signal the intro to Caravan which, of course, follows yet another massive riff/groove. Fisher does change his vocal approach some, singing more than shouting, which fits the overall vibe perfectly. The band ride this groove monster for most of the 8:27, dropping into a few mellower parts, including some keys/synth and acoustic, and eastern-tinged notes on the way out.

Staying with the acoustic, Dreamer is an awesome little number, serving as a break from Borracho’s initial wallop. Fisher also adds some particularly nice lead work over the top, producing a melancholy feel, before the opening riffage of Judgement Day explodes from the speakers, offering a more up-tempo approach that’s a slight departure from the opening suite of songs.

Dirty Money has an awesome opening, rolling, bouncing riff, as once again, Borracho are in total lockstep with one another, including the shout-along chorus, which is impossibly catchy, coupled with the plethora of riffs. Year Of The Swine makes absolutely no bones what it’s about, complete with politically-themed soundbites. Fisher pairs his riffs with more of his diatribe against the current state of the world, to say nothing of the American political turmoil, which has been happening right in Borracho’s backyard for the last five and a half years. When Fisher announces ‘you pledge your allegiance to stupidity’ it’s not that hard to discern what he’s talking about.

The lyrical tension Fisher has been building comes to a head on the 11:24 Burn it Down. A slow-burn intro, Borracho take their time getting going, building the song with all sorts of swirling effects before the inevitable monster delivered at 4:02. Vocally, he sounds like a cross somewhere between Clutch’s Neil Fallon and The Midnight Ghost Train’s Steve Moss, as he’s joined by Trubiano and Martin in shouting ‘Rise Up! Tear Down!’, burn it to the ground, indeed. The band then take their time getting to the end of the song, as all three band members once again display their musical chemistry, winding their way to the end.

Pound Of Flesh reaches its finale with Foaming At The Mouth, a crushing, lumbering, instrumental bash-fest that’s sprinkled with soundbites like a child crying, an evil laugh, and shit like ‘we’re going to raise an army of patriots’, and ‘here comes the money’, plus Charlie Chaplains’ anti-fascist screed from his 1940 film The Great Dictator – ‘I’m sorry, but I don’t want to be an emperor. That’s not my business.’ All that to say nothing of Fisher’s earworm riff. God. Damn.

Sometimes, it can be hard for bands to stand out in stoner rock, or whatever one wants to call fuzz-drenched, riff-powered, rock & roll. Some opt for the epic, experimental approach, while others don’t try to reinvent the wheel. Borracho falls into the latter category. They don’t try to be something they’re not, instead opting for refining and displaying what they’re good at; heavy, fuzzy riffs, behind-the-beat drumming, and thumping bass lines, and the music on Pound Of Flesh, while certainly not a repeat of past releases, offers up exactly that, with just enough changes to make it feel timely and fresh, to say nothing of Fisher’s lyrical approach on this album. I can say with confidence Pound Of Flesh will finish in my top 20 heavy Rock records of the year. 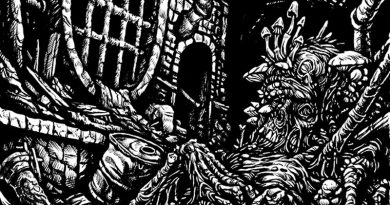