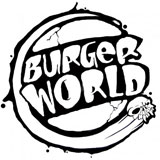 There is a certain charm about truly underground music; Nothing captures the feel of rock and roll quite like watching a band in a darkened, scuzzy, beer smelling dive of a bar and Burger World are the epitome of this ethic on their four track EP.

This quintet of tunes are the essence of Lofi music for when introspection and self loathing are the order of the day, but carry a defiant smirk with their b-movie influenced blend of semi-industrial splatterpunk, fuzz rock.

‘The Fly’ is a blast of southern distortion, like a deranged, redneck Filth Pig era Ministry. Fittingly the subject matter is the film of the same name starring Jeff Goldblum and it captures the tension and claustrophobia of the Cronenberg masterpiece perfectly.

This style is continued on the nasty follow up, ‘The Pig’, all clanging samples and chugging riffs. ‘Sub Zero’ is pure smack rock, howling at the moon in the early hours of the morning, before ‘All The Right Moves’ rounds it off in chaotic style with garbled sports commentary and driving rhythms.

Burger World have crawled from where they’ve been lurking to spit their slice of venom at the universe. This is a signal of ambition where dark imaginations run rampant. At times they are delightfully entertaining and it is a shame that the production and quality control lets them down. With the right resources they could create something to truly fuck with your mind.