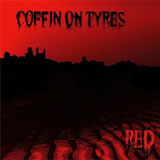 There is something very appealing about French rock bands. Though many of them fail to make the dent they often so richly deserve on the global rock market, they are often the equal of many of their UK or American counterparts and frequently display that little something extra that marks them out as being French. Perhaps it is down to the fact that the French are rather protective and proud of their culture and this seeps into the music they create.

Coffin On Tyres are yet another great band to add to the list of bands flying the stoner rock flag in France alongside Zoe and Glowsun. This eight song debut throws out the riffs thick and fast that evokes the spirit of bands such as Fu Manchu, Hermano and Unida but dresses them up in black and gives them a darkly gothic edge. This is due in no small part to the vocals of Geoff who delivers with a passionate yet mournful croon that is equal parts Jim Morrison and Pete Steele yet capable of reaching into his boots to produce a brutal growl worthy of John Tardy!!! Musically a track such as “Mexican Standoff” serves to back up the more mournful aspects of the band’s sound as it drifts between understated cleaner parts and beefed up riffs that border on Nu Metal. The title track is perhaps more representative of the band’s stoner leanings with its lazy groove and layers of thick fuzz, all backing up that rich croon. “Winter of Life” could have come strutting straight off “Welcome To Sky Valley” with its loping blues vibe and shows that these guys may be skulking round the streets of Paris but their heads are in the desert.

“Skins” kicks off with a tight, motorik beat before kicking into a tune that is as much QOTSA as it is Unida. Here in particular, Geoff’s tale of sexual adventure is delivered in a rich Pete Steele baritone that, it has to be said, makes a welcome diversion from the hordes of vocalists who sing like whiskey swilling, cigarette pounding redneck hillbillies. “Safe Place” offers a chance to draw breath being the closest thing that the band have to a ballad that adds a soulful edge to their desert infused riffing. The song builds from its gently psychedelic opening strains to a powerhouse of forceful guitars and driving drumming that hits with the force of a rugby front row.

Coffin On Tyres aren’t afraid to kick into a higher gear and “Obstructed” motors along on a tight guitar figure that allows drummer Sylvain to batter the shit out of his crash cymbals. Here the band’s claims to influences such as C.O.C aren’t unfounded as they dig deep into the riff bag to produce a corker that evokes Raleigh’s finest.

The production does have to be noted here. For a self financed and self released project, the sound here is exceptional. The band have, between them achieved a fine, rich sound with thick guitars that ooze tone and drums with more kick to them than a kangaroo on Ketamine!!! Long gone are the days when bands would need a major budget behind them to produce a major quality production.

Overall, this debut offering from the band is not necessarily an immediate hit. The idiosyncrasies in their sound can take a little while to get used to; the vocals, splendid as they are don’t strike an immediate chord and can throw the listener a curve ball that confounds expectations for this style of music and the influences they claim. Similarly the music, while abundant with quality stoner riffing demands a little more of the average smoke filled listener than a lot of stoner bands. These aren’t negatives however. Having lived with the album for a month or so and having listened to it at length its mysteries start to unfold themselves and the traits that initially cause some confusion become the strengths on which this band can sell themselves and build their sound. Another winner from the French underground…vive la France!!! 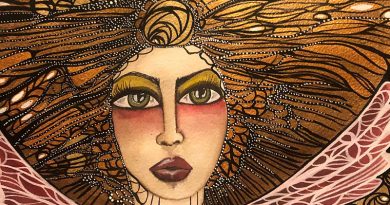