In anticipation of their upcoming 2021 full length Norwegian Gothic, releases April 9th on Pelagic Records and available for pre-order, avant-garde noise-rockers Årabrot return with a surprise five song EP The World Must Be Destroyed, a collection of tracks deemed ‘personal favorites’ by the Tall Man himself (vocalist/ multi-instrumentalist mastermind Kjetil Nernes).

Originally recorded during the Who Do You Love (2017) album sessions, the songs are inspired by French author Antonin Artaud’s 1934 masterpiece Heliogabalus (aka The Anarchist Crowned), a novel which superbly recreates the sex, violence, rebellion and individualism personified by the infamous Roman emperor—i.e. ‘anarchy in action’. Unleashing this EP at a time when the cyclical nature of history has come full force, is timely if not serendipitous for those excited when life actually imitates art.

Recorded at Steve Albini’s Electrical Audio Studios in Chicago, and produced by Nernes himself and Karen ‘Dark Diva’ Park, the band is joined this time around by Dana Schecter (Insect Ark/Swans), Andrew Liles (Current 93/Nurse With Wound) and tubaist Kristoffer Lo (Highasakite/Motorpsycho) to round out a heterogenous cast of stellar players.

Opening instrumental Inner Sanctum sets the mood with textured samples and discordant synth, reinforcing what we all expect to be an uneasy ride—the band is well known for displacing their listeners with off kilter dynamics and progressive techniques, always shifting the balance between bizarre and the more tangible heaviness of traditional rock. As Nernes puts it, ‘…the revolution will come soon. All this will be destroyed…’

enough weight to crush you, enough melody to anchor you, and enough complexity to sustain you…

His take is that the current version of the world is due for a reboot, even if that means its gruesome annihilation. Likewise, title track The World Must Be Destroyed is almost anthemic in its mid-tempo pummeling repetition—it’s a damn catchy riff that will have you headbanging for the full four minutes and forty four seconds, even if it’s lyrics hint at our own necessary extinction.

The arrangements for The Coming act as more of an accompaniment to Nernes’ spoken word, slowly building into a dizzying swarm of cacophony and repetitive snare hits droning synth and guitars – probably the least accessible among the tracklist, but certainly effective in punishing the listener through sensory immersion. Highlight Another Hallucinatory Dream finds the perfect middle ground between addictive weirdness and the conventional hook of great pop song writing, that crucial point where innovation and custom cross. The result is a banger of a song, with enough weight to crush you, enough melody to anchor you, and enough complexity to sustain you.

The EP is capped off with a spoken word reprise of the title track, reinforcing the band’s underlying message of ‘aufheben’ – the interaction of thesis and antithesis. In order to preserve, we must destroy, and in essence sublate. Whether or not we’re fodder for society’s rebuild, I’ll be jamming to this on blast when tomorrow hits. 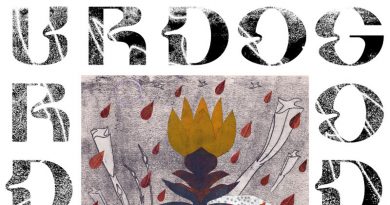