Sfeerverzieker is fronted, sided, and backed by Sven Post who makes post-metal with a heavy emphasis on doom and sludge. His first outing under the Sfeerverzieker moniker Wrath Of The Child, released earlier this year, garnered positive comparisons to heavy staples such as Neurosis, Electric Wizard, and EyeHateGod. Single person projects can be a lonely existence, so Post enlisted Dutch graphic designer Jelle Kunst for art direction and backing vocals on the final track.

A curved guitar approaches at a steady, controlled pace introducing itself on album opener Fall Of Men. These repeated notes are the beating heart of the whole album and truly something I found to be more mesmerizing with each listen. Drums surround the chords and make a deep echo, meshing some destitute soundscape filled with isolation, anger, and grit. Gazing into this sonic abyss, the mind tricks itself into finding bizarre patterns evocatively dancing to the noisy melody.

As far as I can tell from searching their Bandcamp, Google and my own repeated listens, the grunted vocals are mostly devoid of words. So, rather than tell a clear narrative, they add another layer to the collage. Each section sits intricately, acting with great precision and making a haunting spiral I find a strange sense of comfort in. Every spin adds to the hypnotic noise I can’t seem to break away from.

The Horrors We Are In is a messy and rowdy number. Gnarly drumming spliced with multiple guitars fuse together making a sludge metal, punk rock hybrid of sorts. Dull, shrill chords and fuzzy distortion create an obtuse scenery impossible to pick apart. A detuned guitar rolls in to collide with the feedback on Sentenced. Growled vocalizing comes in, slightly buried at first, then hides deeper, and eventually disappears completely into a dense post-metal malaise of humming drones played at abstract time signatures. Occasionally, a stray guitar solo slips out, opening a vast tunnel where every note ricochets directionless.

With tones still freely bouncing, Masters Of Insanity acts as an all-out assault against them. The ferocious attacks are performed by the riff that may have started the album calm but now moves frantically. The cliché line about ‘the definition of insanity is doing the same thing expecting a different result’ really goes through my head a lot here. The pace starts a panicked sprint, gaining and losing speed while keeping tensions high. It seems to be going a different direction each time it’s played, like it’s trying to get a different result… see why that phrase came into my head?

Lost drops traditional instruments in favor of some freaky sci-fi style ambiance, until the guitar returns sounding a lot denser than before. Post-metal musicians take great pride in their collection of distortion pedals and, I assume, every single one at Post’s disposal comes on cranked up high. The diminishment of every single tone melts and sinks in a haze of fuzz.

The methodical beginnings of the title and final track, Death Is The Desired Ending, paint an unassuming picture until an abrupt transcendence spreads the song’s wings. Rumbling bass licks flex across thick, stacked and layered guitars as we finally take flight. A few of Post’s wretched vocals can actually be made out here and my ears prick up with full attention to the actual words. I scramble to write them down on paper. Clear as day ‘death is the desired ending’ is heard… I should have seen that coming.

The guitar, that’s been keeping the pace since the album’s beginning, finally crescendos in what may be the longest build-up I’ve heard this year. Mixing with Kunst‘s black metal style vocal contribution raises the altitude to the outer edges of the atmosphere where it gains pressure and wonder. A sudden end bursts the album into orbit. 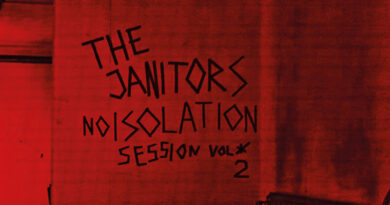