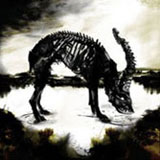 Amenra have the feel of a band, whom given the chance, could get the whole ‘Atmospheric Sludge’ metal thing down to a tee. It’s an impressive listen to anyone who’s a fan of the more vocally searing bands like old Isis. There’s a rare sense of agony in Amenra’s vocals that isn’t often found in a band of this type. It matches the ferocity of the music really well, and helps them stand out from the crowd slightly more. Female vocals to offset the lead vocalist’s catastrophic style of singing, melody that’s dragged out of waves of feedback and distortion, and powerful build-ups are all here in ‘Mass III’.

The slower and more delicate moments aren’t anything special, to be honest. They work well, don’t get me wrong. They make a nice contrast against the abundance of heavier sections throughout the album, giving them that extra ‘oomph!’. It’s just that they seem to have been put in there more for that reason, rather than to actually give some evolution to the music itself. If they spent a little more time on the intricacy of the calmer sections, they’d have created an LP album to stand up to the likes of classics from bands such as Isis, Cult of Luna, and Neurosis.

That’s the origin of the gripe that I have with this album -as impressive as it is-, in the way that they don’t fully exhibit the variation that they’re clearly capable of. Songs such as ‘Nemelendelle Twuhste en Tljihste’ (don’t ask me to pronounce it) seem to opt for repetition over progression via atmosphere. Then you get the next track where you’re subjected to not only a full-blown assault of the vocals and instruments… but a change in tempo as the break-down slides in, and a much more memorable song evolves from its not-so-humble beginnings. It doesn’t break the mould, by any means. It does, however, solidify their place in a genre of music that is constantly changing and adapting. I have a feeling that their next album is going to play on their occasional penchant for progression within their music. Until then, this is a solid enough hardcore album which hints to something great; definitely worth buying.