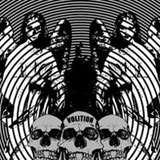 This is the debut release from Volition who hail from the cold dark depths of the North West of England and boy does it show in their music! They’ve been around now for about 18 months and have already built up quite a following with their Despondent Doom which is a credit to the hard work they’ve been putting in and with them already having shared the stage with the likes of Blood Island Raiders, Raging Speedhorn, Narcosis & Atavist, surely this is just a taste of things to come!

Anyway, back to the Demo in question, it features 2 punishingly heavy tracks clocking in at just under 15 minutes and slowly crawls into life with the opener ‘Cheyne Stoking’, a monstrously heavy track which has a reoccurring main riff that guitarist Jas & Marko painfully drag along throughout its 8 minutes and helps forge the whole feel of torture which Volition manage to create. Dave’s vocals start out as a sombre spoken epilogue before transforming into a deep, guttural growl and with the rumbling bass lines of Burnsey, Junkyard’s tight drum patterns and the subtle guitar breaks you really get a drawn into the beast within.

The 2nd and (sadly) final track ‘Halls Of Degradation’ is properly my favourite of the 2, starting out with much the same feel as the opener with huge downtuned riffs that pummel your body from every direction. The vocals also show a bit of variation with a more tortured scream delivery but then the song makes an unexpected twist as it breaks down into an awesome wall of resonating feedback, funeral march drums and with the ferocious dual vocal attack of Burnsey and Dave, give the whole sound a harrowing and eerie feel!

To sum up, Volition are treading a similar path to the likes of Grief, Winter, Corrupted and even Noothgrush but, at the same time, manage to put their own stamp on proceedings and with the title of the 1st track ‘Cheyne Stoking’ being a medical term used to describe the breathing pattern of a terminally ill person as their internal organs are shutting down, this could very well be used to describe what happens to you while you listen to this!!

It also comes with an impressive hand screen printed sleeve designed by Oliver Marescaux at www.ttdmrt.com, but be quick as these are limited to a mere 100 copies and with their first full length due out later in the year on Totalrust Music, Volition are certainly a band to look out for in 2007!