Alchemy Of Flesh is the brainchild of Tim Rowland, who has put out some excellent on-off projects in the past but has now set his sights on conquering true death metal glory. Ageless Abominations is out on August 13th and pays homage to the legendary Florida scene, instead of these Swedeath copycats that death metal has been saturated with recently. It’s even been recorded with the same model guitar as Trey Azagthoth, which explains a lot of the familiarity I felt straight away.

Opener Pain Primordial is full of massive, swooning Immolation riffs that could easily slip out of Covenant-era Morbid Angel too. Titan bends on the guitar strings conjure a tectonic like effect of the massive riffing, and it’s underpinned by a devastating battery of drums. This is a fearsome, doomy beast of a track, and just the ticket for an opening salvo for a record. House Of Earth keeps that massive sound rumbling, and everything feels nice and thick and satisfying. Slipgates To Annihilation smashes through your skull and could easily have been a lost cut from Domination, such is the ancient Angel worship on show.

At times, Alchemy Of Flesh feels a lot more like a doom band than a death metal band. Maybe I’m overthinking it but the sheer lumbering weight of tracks like Sleeping Chaos and the unconsciously heavy Fiama Nera Rites definitely gives a lot of doom vibes. It is of course wrapped in a death metal package (glorious DOOM style artwork by the way), but the concentration on that during a number of tracks is a winner for me.

Titan bends on the guitar strings conjure a tectonic like effect of the massive riffing, and it’s underpinned by a devastating battery of drums…

You’ve got that deep Asphyx/Incantation rumble, with that Azagthoth guitar tone and a great vocal performance, all coming to a head in closer Opener Of The Way, crushing all in its wake with waves of deathly, doomy monstrosity. The final two minutes is some monstrous, earth shaking stuff, like the steps of some Eldritch Kaiju rebirthed to destroy the cosmos.

Ageless Abominations is a record that encapsulates exactly why some of modern death metal feels so stale at the moment. Alchemy Of Flesh draws strength from a different direction from much of it, and therefore immediately leap ahead of their competitors. There’s no desire for speed or savagery, just a tumultuous churning miasma of heaviness that knows exactly when to hold back and when to kick it up a gear. This is a triumph for death, and a reaffirming that maybe a little more Floridian worship is due again. 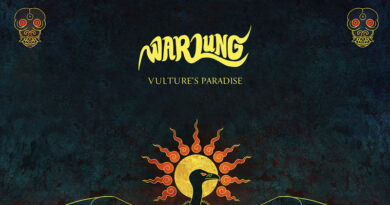