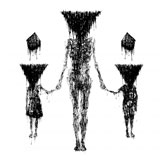 Any release from Tristan Shone’s long running Author & Punisher project is an event in my house. Ever since I heard the mechanised crash of The Drone Machines in 2010 I was hooked with this hybrid of man and machine combining to make some of the most invigorating and challenging music not only in the Doom genre, but also in the Industrial one too.

The truth is the journey began way before that when Author & Punisher released ‘The Painted Army’ in 2005 and the Godflesh influenced ‘Warcry’ in 2007, before Shone took the decision to graduate from playing guitar and using a laptop and immerse himself into machines, tying the sounds created to a visual piece of interactive art that responds and reflects the passion injected by the man himself.

This sonic advancement continued with last year’s critically acclaimed ‘Ursus Americanus’, an album that saw dub step sounds and concepts twisted and intricately woven into the fabric of the music as a new set of ‘Dub Machines’ were incorporated, adding a greater sense of light and shade. As much as I love the ice blasted bleakness of the 2010 album, last years release was a step on again, adding new terrifying dimensions and tearing up the Doom/Industrial rule book once more.

It should then come as no surprise that ‘Women & Children’ is yet another step down the evolutionary rabbit hole; new toys have been developed like the voice modulating masks and Author & Punisher combines elements of both machines and more traditional apparati to stretch and blur the dynamic palette from doom to industrial, to heavy bass music, and back again.

In short this is Author & Punisher’s tour de force so far; gentle piano and clean tender vocals would not, in the past, have been things you would been exposed to, but here they sit along side the vertigo inducing swooping and soaring of the other sound manipulation devices. This is Shone at both his most organic and most futuristic yet.

For all the talk about innovation and artistic melding of man and machine, when it comes to ‘Women & Children’ as an album the music has to hold it’s own and deliver as a listenable product. And boy does it! The title track begins the experience with a cold mechanical hissing that slowly rises and grows, filled out by dub noises and beats, effect driven vocals squalling and raving madness like some digital end time prophet before it explodes and the machines shift through the gears with thunderous grind and massive doomy drones.

‘In Remorse’ is more organic with some of the most vocal passages Shone has written. Here eerie monk like chanting interplays over a background of terrifying roars, huge throbbing beats and electronic breakdowns. The introduction of more traditional instruments or at least machines mimicking that feel – like bridges and guitar work outs – make this seem the closest to a traditional song that Author & Punisher have produced, but loses nothing of the menace and power you would normally associate with the project.

Over the course of the seven tracks, this theme of organic experimentation continues from the Vangelis esque ‘Miles From Home’ with it’s powerful repetitive vocal refrain of ‘I can change’ – an important motif for the latest step on the journey – to the stomping drone of Fearce.

Elsewhere ‘Melee’ conjures atmosphere using groove and rhythm to great effect and sounds like it wouldn’t be out of place on Nine Inch Nails ‘The Fragile’; ‘Tame As A Lion’ has a searching melodic vocal and light piano that still somehow manages to feel unsettling and the closing track ‘Pain Myself’ starts in a similar vein, counter pointing the clinical march of the machines with almost tender and, dare I say human, emotions before it grows into a lurching industrial monster that towers over the album.

In the past I could understand some people’s reservations about the music, I wouldn’t agree with them, but I could understand you probably need to be (ahem) wired a certain way to find the music as fascinating as the process by which it is made. However on ‘Women & Children’, Tristan delivers his most rounded and accessible album to date. There is more to get to grips with in the songs, not just the sounds, but more contrasts, more highs and lows and an expansive feel that adds more depth and definition to his arsenal.

Once again the envelope has been pushed, the box stepped outside of and the tenants of Doom and Industrial have been refracted through the prism of the mind of a true innovator and they sound all the better for it.

There are so few unique and wonderful things left in music, but Author & Punisher truly is one of them.

Atomic Cries ‘For Those Who Came Before Us’ CS/Digital 2012