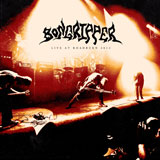 Screaming and running through the dark and drizzled night, from the Het Patronaat venue they came. “Behold!” many cried, “We hath seen thee Bongripper and they have caused much devastation to our minds!” The furore quickly spread; “They will play again tomorrow as the sun goes down! Satan Worshipping Doom! You have to be there!” And not for the first time, the bearded, patch-jacketed hoards were right – you did have to be there. O’er the brow of the Tilburg horizon, they returned in their thousands. That afternoon, the 013 stalls were crammed seemingly beyond capacity underneath the hellish tapestry of Bongripper’s masterpiece cover art. The sardined-in bodies served only to enhance the unholy vibrations that the Windy City foursome spewed forth, as the entire auditorium closed their eyes and nodded in unison to the deafening sound of one of the heaviest rituals on earth.

That was then and this is now. Eight months after Chicago instrumentalists Bongripper played both their first and second ever European live shows at the Roadburn 2012 Festival, Burning World/Roadburn Records have chosen to release both sets as part of a mammoth double-dose of cranium-bending doom. Side-A features their landmark 4th record, 2010’s Satan Worshipping Doom played live in its entirety before a packed-out 013 Main Stage as part of the Sunday Afterburner festival sessions. Side-B takes you back in time, just 24 hours mind, to their Saturday night performance, featuring tracks from some of their older, muddier self-released gospels. On that rain-soaked weekend in The Netherlands the hype for the heavy atmospherics, thunderous percussion, apocalyptic noisescapes and eerie sense of beauty that these energetic young Americans summoned from the ugly gates of hell was nothing short of gigantic. Hearing tales of their demolition of the Het Patronaat as I chose instead to watch J Mascis, Mario Rubalcaba, Mike Eginton and Graham Clise play their one-of-a-kind Heavy Jam on the main stage; I was determined to find out just what this Satan Worshipping Doom was all about. In short, I was blown away by the power, the precision, the mood swings and the never-ending avalanche of riffs; riffs as inspiring as they were inspired. And now, for absolutely no expense whatsoever, (broadband charges notwithstanding!) you can relive every earth-quaking second of both of these incendiary live shows courtesy of Burning World’s treasure trove of a Bandcamp page.

Let’s get down to business then. From the very moment the colossal backdrop fell to display the torturous prophecies of Satan Worshipping Doom ’s glorious cover art as a 50-square foot abyss, it was pretty damn obvious this would be a truly epic live performance. At the time, I was expecting Bongripper to be some gnarly old dudes covered in tattoos and leather patches who’d been around the block more times than Dolly Parton’s chauffeur, so it was with some surprise that four sprightly young lads emerged in simple polo shirts, hoodies and trainers to erupt into the labyrinth of Hail. Surrounding drummer Dan O’Connor like some kind of ancient henge ritual, guitarists Dennis Pleckham and Nick Dellacroce wait on his every flicker of motion like a orchestra to a conductor as they wait to conjure forth the first monster riff of the day. Hail proves one of the more accessible Bongripper outings and makes for a dramatic opener. Fusing the veteran doom influences of Sleep, Isis, Neurosis and Bongzilla with the more up-to-date sphere of Yob, Cough and Ufomammut, this really is a whole new wave of demolition. Satan sees the ‘Ripper open up and throw more experimentation about the stage as bee-swarming black metal, bouncy stoner rock and tombstone-carving doom marry succinctly as one entity rather than a mixed plate of riffs that twist incoherently between the genres. Bongripper push forward what so many doom bands fail to do in these 15-minute-long sessions of slaughter – the importance of having a ridiculously talented drummer. Dan O’Connor is the beating black heart of the performance and transcends everything from blastbeats to gentle springtime cymbal play with an ease and guile very few could master. Worship is perhaps the pinnacle of both the performance and indeed of the record. Whilst being equipped with the album’s most crunching heavy metal root notes it also plateaus out into a sense of beautiful ambiance, somehow derived from the barbaric battery of unholy sludge. Mesmerising. How else to end such a vulgar display of power than with a closer entitled Doom? Fifteen more minutes of utter filth and punishment await, ground out through every last painful chord that Pleckham and Dellacroce can muster. The Tilburg mob goes wild.

After such a stellar full record performance, it’s always going to be a slight comedown to hear a band’s earlier rawer material from a more underappreciated back catalogue. The Saturday night set is as tight and focussed as the Sunday one, if only a little less spectacular in the material. Sex Tape and Hate Ashbury furry by like bats in a cold dusk sky – commanding and fierce, yet often graceful and see-sawing in pace. The imposing Fisting is a noisy cauldron of deafening drums and shattered chords and a second version of Worship (or actually, the first!)is lapped up by Roadburn’s thoughtful, nodding skulls. The hilariously titled Reefer Sutherland, a highlight of 2007’s Hippie Killer LP, is a sludge triumph backed by O’Connor’s hammer blows behind the kit and acts as a perfect foil for a closing eponymous excerpt from the 2006 debut The Great Barrier Reefer, an album which is surely the missing link between Streetcleaner and Dopesmoker.

This is a special pair of performances by a band very much in the modern ascendancy. Throw in James Plotkin and Dennis Plekham’s perfect mixing and post-production jobs, plus the free access via bandcamp (2CD and 2LP also shortly available) there’s really no excuse not to get involved with a band who are at the cutting edge of sculpting a whole new path of heaviness.